by mvennerPosted on March 22, 2017
Cities is supported by

This article is 2 months old

“It’s always the same story,” says Steve Sims, who runs Houston’s Ghost Bike scheme with wife Melissa. “We speak to the family who tell us ‘My loved one was struck and killed.’ It’s devastating for them, but when someone gets hit on a bike here, nothing gets done. It happens over and over. You get involved every time but after a while they just kind of blend together.”

We meet at the tattoo parlour the ghost bike group uses as a base. The garage out back is packed wall to wall with old bikes which have been donated and spray-painted white, ready to be used as memorials to the victims of crashes with cars and trucks. It’s eerie to think these bikes will soon mark the site of someone’s death – like visiting the scene of a future mass killing.

Houston has no shortage of victims. Around 1,700 cyclists have been hit by cars on the streets of America’s fourth biggest city since 2013, with drivers failing to stay at the scene in nearly a quarter of cases, according to data from the Houston police department. Twenty-three cyclists have been killed – seven of them by hit-and-run drivers. Many are so-called “invisible cyclists”, people cycling to and from poorly paid jobs early in the morning or late at night, many without lights or a helmet. If the cyclist involved broke a traffic law such as not yielding the right of way, or did not have proper lights, the driver is usually considered blameless, one prosecutor told the Houston Press.

Since the first ghost bike was placed in St Louis, Missouri, in 2003, the movement has spread to cities around the world, with a website giving advice on how to set up a ghost bike programme. Schemes are often started in response to a spate of local deaths, and tend to come and go, but Houston seems to have a particular problem.

An average of six people on bikes are killed every year in the city itself, but that rises threefold or more for the wider urban area, according to Steve Sims. And while Houston has tripled the size of its Metro light rail, agreed a threefold increase in its bike share scheme, and drafted its first new Bike Plan in more than two decades, it remains a city dominated by cars and large SUVs.

We want drivers to see the person. We need them to recognise it was a human being that was killed

Cycling some quieter inner city areas, or the bayou trails, is pleasant enough – but try riding outside the loop formed by the I-610 freeway and it soon gets more aggressive. Census data shows the number of people commuting by car in the Houston metro area has increased over the past decade, to more than 80%, with three-quarters of those trips made by solo drivers without any passengers.

Richard Tomlinson set up the Houston scheme after the hit-and-run killing of Chelsea Norman in December 2013. She was cycling home late at night from her job in a Whole Foods store when she was struck by Margaret Mayer, who was driving back from a bar. Mayer didn’t stop; Norman died from her injuries a few days later. In court Mayer claimed she believed she had struck a tree, but was eventually convicted of failing to stop and sentenced to 15 years.

By the end of 2015 Tomlinson and a band of helpers – all volunteers – had set out more than 60 bikes.

Keen cyclist Jon Trevelise was killed in nearby Galveston in April 2014. He was cycling in the shoulder of the road when he was struck from behind by a car. The 68-year-old driver told police she was lost, and was driving in the shoulder while she looked for an address. “She looked up and the man on the bike was there,” the police report stated. She was charged with manslaughter.

The following year, David Rosenfeld was cycling to take part in a memorial bike ride in honour of Trevelise when he too was hit and killed by a car. Two more cyclists were killed the next month, and that October 56-year-old Bobby Brooks died after allegedly being hit by a school bus. The driver’s attorney said she didn’t realise she had been involved in an accident. “She didn’t realise she … hit anything or anyone, which is why she continued on her bus route,” he told reporters.

Houston’s first ghost bikes were simply chained to a fence or signpost at the location of the crash – a haunting reminder to drivers and cyclists.

Then graphic designer Steve Sims got involved. He offered to make something more lasting – a permanent plaque and laminated photo in place of the photocopied news clipping or picture which would fade after a week or two.

“We want drivers to see the person,” he explains. “We need them to recognise it was a human being that was killed, and not the caricature they have of a cyclist. The people being hit and killed aren’t generally the people in spandex most people think of when they think of cyclists. They are people who are riding bikes because that’s how they need to get around – it’s their transportation.”

At the same time Melissa hit on idea of contacting the family and friends of the victim through Facebook.

“We realised we had to reach out to the families,” she says. “They have enough on, though, so I’ll send a message to a friend of the family. I make them aware of what we do and ask them to pass on our details, to see if they’re interested in a memorial.”

Not everyone is. One family didn’t want a memorial because the victim’s friend passed the scene of his death every day and it would be too strong a reminder.

But if the family agrees then the ghost bikes team are guided by what they want. Generally Steve will unload the bike and let someone from the family roll it over to the spot. Some say prayers, or will ask Steve to do so; others tell stories or stand in silence. 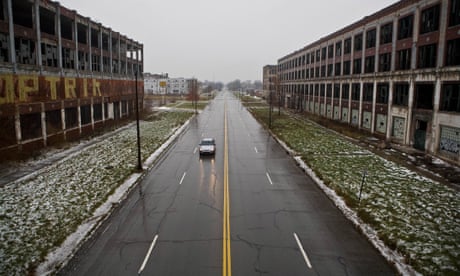 America’s road trip: will the US ever kick the car habit?

“It’s about remembering,” says Steve. “We’re putting a name on the bike, and making sure it represents a person. ”

They don’t generally mark the locations where children have been killed on bikes – apart from one 13-year-old, an exception made on the request of his relatives. Michael Demny was killed as he cycled near his school in the late 1990s. The car driver fled the scene.

“That was the first one we did with the family,” says Steve. “It happened years ago and nothing was done. The family reached out to us. It was so fresh when they told us the story, they were reliving every detail. The mother – you could just see the weight coming off her – to know someone was listening, that something’s going to be there – that their relative is going to be remembered. I feel my role is to allow some of these families closure – to show that someone noticed.”

The ghost bike volunteers also hope the sight of increasing numbers of white memorials will encourage drivers to pay more attention to the road, or think twice before texting while at the wheel.

“If people see them all over town, if they see one after the other, then at some point we’re going to hit a critical mass,” adds Steve. “We’re going to put out so many that people have got to realise what’s happening.”