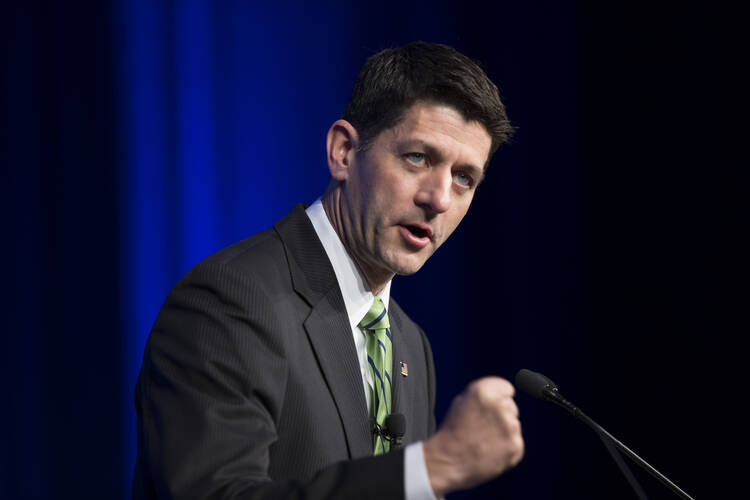 Speaker of the House Paul Ryan fielded a question from a Catholic nun about health care and poverty during a national television event last night, insisting that his political goals of reforming federal anti-poverty programs are not in conflict with his Catholic faith.

“I know that you’re Catholic, as am I, and it seems to me that most of the Republicans in the Congress are not willing to stand with the poor and working class as evidenced in the recent debates about health care and the anticipated tax reform,” Sister Erica Jordan, O.P., said to Mr. Ryan during a live CNN town hall. “So I’d like to ask you how you see yourself upholding the church’s social teaching that has the idea that God is always on the side of the poor and dispossessed, as should we be.”

Mr. Ryan sought common ground, telling the former school principal, “Sister, you may—this may come as a surprise to you, but I completely agree with you. Where we may disagree is on how to achieve that goal.”

Ryan: “Sister, I completely agree with you. Where we may disagree is on how to achieve that goal.”

The speaker, who wrote about the evolution of his thinking on poverty in America in 2014, said that he interprets the church’s teaching that the poor must always be a priority as a mandate for “upward mobility—that means economic growth, that means equality of opportunity.”

Government spending, he argued, has proven ineffective in fighting poverty, and so he supports reform efforts that lower taxes for companies so that they do not move to other countries, keeping jobs in the United States. He argued that federal anti-poverty programs and the tax code are structured in a way that cause some people to decide not to seek work.

“The poor are being marginalized and misaligned in many ways because a lot of the programs that we have, well intended as they may be, are discouraging and disincentivizing work,” Mr. Ryan said, prompting a chorus of boos from the audience.

He said that an unemployed single mother of two risks losing federal benefits should she find a job.

“We have to fix that. And that is why we have to fix it not by just kicking people off callously, but by making sure that we can customize these benefits to help a person get from where she is to where she wants and needs to be,” he continued. “That means we have these benefits phase out in a certain way that fits her needs and goes and fixes it.”

The speaker did not directly address the part of the sister’s question about health care.

“A lot of the programs that we have, well intended as they may be, are discouraging and disincentivizing work,” Mr. Ryan said, prompting a chorus of boos.

Many Catholic leaders, including more than 7,000 Catholic sisters, condemned proposals championed by Mr. Ryan and his G.O.P. allies in the Senate that attempted to dismantle the Affordable Care Act.

In May, Mr. Ryan celebrated with President Trump at the White House after the House passed a bill repealing Obamacare and replacing it with a tax-credit plan to help with insurance costs.

In response to that vote, Catholic bishops released a statement expressing disappointment with many provisions in that bill, saying it contained “major defects, particularly regarding changes to Medicaid that risk coverage and affordability for millions.”

Despite the White House’s backing, subsequent efforts to repeal the Affordable Care Act died in the Senate last month.

Mr. Ryan has a complicated history when it comes to his views about the role of government in fighting poverty.

As the Republican vice presidential nominee in 2012, Mr. Ryan referred repeatedly to the poor as “takers,” a dig at Americans who rely on government assistance to make ends meet. A couple of years later, Mr. Ryan apologized for that characterization, saying he learned from talking to people on the campaign trail that eradicating poverty was more complicated than he believed.

Last year, he told CBS News that he was “wrong” to make such a characterization and in the lead-up to November’s presidential election, Mr. Ryan outlined a G.O.P. anti-poverty plan to reallocate federal money to local charitable organizations. Some Catholic leaders praised Mr. Ryan last year for his attempts to persuade his Republican colleagues to tackle poverty.

During last night’s town hall, the speaker pointed to Catholic Charities as an example of effective anti-poverty programming that he said assists poor people in moving “from where they are to where they need to be” in terms of financial stability.

“If only government would actually help do that, as well, I think we could go a long ways in fighting the root cause of poverty,” he said.

“We’ve got to change our approach, focus on outcomes, focus on the person, and always encourage work, never discourage work, and make sure we can customize benefits so that we can get people out of poverty,” he continued.

Earlier this year, the president of Catholic Charities USA, which speaks for 177 local agencies, sent a letter to lawmakers condemning G.O.P. plans to cut Medicaid and other social safety net programs.

“While CCUSA supports the responsible use of our nation’s fiscal resources and has worked consistently to improve effectiveness in anti-poverty programs, reforms that seek only to cut our nation’s social safety net will further strain efforts to meet individual needs and risk pushing more Americans into poverty,” Sister Donna Markham, O.P., wrote on June 20.

Monday’s town hall meeting was the first such event for Mr. Ryan in several months. Leading up to it, a pair of Catholic priests from Wisconsin said they had hoped to attend in order to challenge Mr. Ryan on immigration, telling the Milwaukee Journal Sentinel that they have tried repeatedly to interact with the speaker to no avail.

Mr. Ryan defended how he squares his faith with his politics last night, telling Sister Jordan, “But the point I’m saying, sister, is that’s how I practice my values and my faith and my principles, in trying to apply these principles to fighting poverty more effectively, because the status quo has not been working and I think we can do a whole lot better.”

A video of the exchange was posted on Twitter, below.

Nun: As a Catholic, how do you uphold the church’s teachings on the poor?