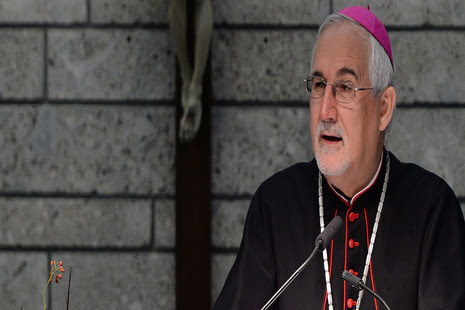 A German theologian-bishop has called for the ordination of woman deacons, saying it is more important than relaxing mandatory celibacy or ordaining married men of proven virtue (viri probati) to the priesthood.

“Women should be ordained deacons. It is a sign of the times”, said Bishop Gebhard Fürst of Rottenburg-Stuttgart.

He told a 27 March gathering of the German Catholic Women’s Association (KDFB) the time had come for women deacons. The association, which has been demanding the move for over twenty years, was marking its 100th anniversary.

In his keynote address to the group, Bishop Fürst said the faithful had been waiting for decades for the Church to answer the question of women deacons. He said the answer was therefore long overdue and now imperative.

The 68-year-old bishop, who succeeded Cardinal Walter Kasper some seventeen years ago as head of the diocese, said he interpreted Pope Francis’ silence on the issue was a sign that the pope was “not totally opposed” to the subject.

Bishop Fürst said he intended to campaign for the women’s diaconate in German bishops’ conference since its members were divided on the issue. However, his spokesman Uwe Renz told the German daily Stuttgarter Nachrichten (27 March) that the bishop would not be appealing directly to the Vatican.

Already in 1997, under Fürst’s leadership, the diocesan academy in Rottenburg-Stuttgart held an international theological congress on the diaconate for women.

The blowback to his latest declaration of support for the woman diaconate came within days.

On 29 March, Bishop Rudolf Voderholzer of Regensburg said he believed it was “impossible” for women to be admitted to the Catholic Church’s threefold ministry (bishops, priests, and deacons).

Writing on his diocese’s website, he suggested people wait for the conclusions reached by the Vatican commission Pope Francis had set up to clarify the issue.

However, he said he did not think the commission would reach a conclusion different to the one reached by the International Theological Commission (ITC) in 2003. It concluded that deaconesses from the early centuries “were not purely and simply equivalent to the deacons”.

The current head of the Congregation for the Doctrine of the Faith, Cardinal Gerhard Müller, was a member of the ITC group that did the study. Bishop Voderholzer, 57, succeeded him five years ago to head the Diocese of Regensburg.

The bishop said there were a lot more important things than “deaconesses” for which the KDFB should be campaigning. For example, he suggested the association would do well to oppose gender mainstreaming and fight against the sexual exploitation and trafficking of women.