With Puerto Rico’s dirty, costly electric grid wiped out by Hurricane Maria, now is the time for a clean power rebuild.

Microgrids built around cheap renewable power and battery storage are now the fastest and cheapest way to restore power — while at the same time building resilience into the grid against the next disaster.

That’s been proven by Florida after Hurricane Irma, Japan after the tsunami that caused the Fukushima meltdown, and India after recent monsoons.

“Wouldn’t it make abundant good sense if we had small modular reactors that literally you could put in the back of C-17 [military cargo] aircraft, transport it to an area like Puerto Rico, and push it out the back end, crank it up, and plug it in?” he said at an event in Washington, D.C. for National Clean Energy Week. “Hopefully, we can expedite that.”

It would be quite an effort of expedition. Such small nuclear power plants are not expected to be commercialized until the mid-2020s, and even if they are, they are projected to be wildly expensive — just like current reactors — and not that small (650 tons). Nobody’s going to be “literally” putting one in a C-17 and pushing it out the back end on a small island ready to go.

The U.S. territory doesn’t have time for such political pipe dreams.

Right now, Puerto Rico’s desperate lack of power — for hospitals, water and sewage facilities, and air-conditioning in the sweltering heat — is at the center of the ongoing humanitarian crisis for the 3.4 million U.S. citizens in Puerto Rico.

Like Bush, Trump is both oblivious and tone-deaf as hundreds of thousands of people of color suffer. Hurricane Maria destroyed 55 percent of the transmission towers that support high-voltage power lines and wrecked 90 percent of the distribution network, according to utility experts who have assessed the damage, Reuters reported.

Reuters put together this remarkable graphic on “power restoration after major U.S. hurricanes.”

But this tragedy does open an opportunity. The old grid was an antiquated, expensive, polluting disaster. Mired in debt, the local utility declared bankruptcy in July. (For a useful history, see the Huffington Post’s “Puerto Rico’s Colonial Legacy Doomed It To Dirty Electricity — And Now Darkness.”)

No wonder the utility is bankrupt, and the island is economically uncompetitive.

In terms of speed of recovery, nothing beats solar with storage. As Inside Climate News reported, Florida homes with solar panels and batteries that lost power from Irma in the early hours of Monday, September 11 were able to restore power in a few hours when the sun came up. Long before others, they could use lights, refrigerators, and wifi.

Coral Springs Florida used solar plus batteries to quickly restore 13 major traffic lights. Although it’s worth noting that solar homes without storage are out of luck in Florida. The utility, FPL, does not allow grid-connected systems without batteries to be used during an outage. And the state code requires you to be connected to the grid even if you could be grid free. 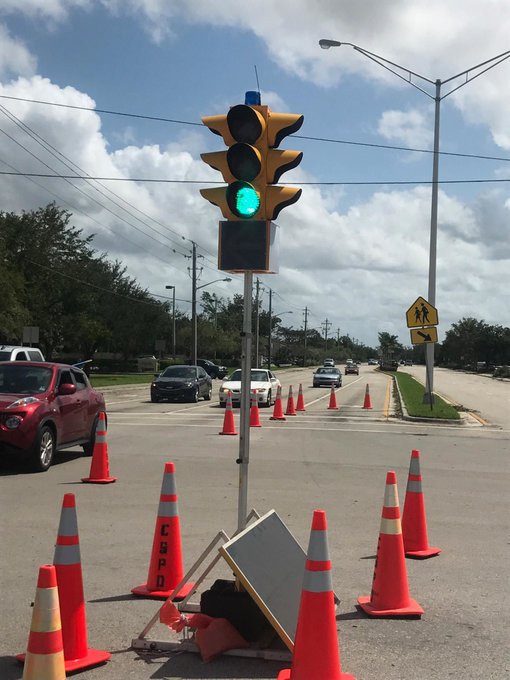 Temporary solar traffic signals have been placed at intersections to ensure your safety. If no traffic signal, use as a four-way stop.

Case studies from Japan, India, and Hawaii also make clear the only technologies that can simultaneously deliver the fastest, cheapest, cleanest, and most disaster-resilient rebuild possible are micro-grids built around renewables and storage.

When northeast India was ravaged by an unprecedented deluge this summer, causing widespread blackouts, buildings with solar roofs were able to keep the lights on, even after the sun set. DESI Power has been installing the solar across the region. Panels are mounted either on the roof or a few feet off the ground so they can survive flooding. The battery box is typically portable, so it can be can be moved in case of flood. “Despite the heavy flooding, we were pleasantly surprised to find that nearly 75 percent of our power systems remained functional,” DESI’s chief operating officer told NexusMedia.

In less than a decade, more than half a million people in India who had lacked electricity now have off-grid solar. As one expert on distributed solar in the region said, “Solar power has changed people’s lives, improved their health and enhanced their livelihood opportunities while benefiting the environment.”

Japan has gone even further following the 2011 tsunami that caused the Fukushima meltdown. In what Reuters described last week as a “quiet energy revolution,” dozens of cities have gone off grid or built renewable micro-grids with the help of Japan’s “National Resilience Program,” which had $33 billion in funding this year.

Higashi Matsushima, a city of 40,000 that lost 75 percent of its homes and 1,100 people in the 2011 catastrophe, built microgrids and decentralized its power generation “to create a self-sustaining system” that can meet a quarter of its electricity demand.

Such a micro-grid can allow basic needs to be met even if the region suffers a cascading grid failure. The city “built its own independent transmission grid and solar generating panels as well as batteries to store power that can keep the city running for at least three days.”

As for cost, the Hawaiian island of Kauai now produces some 90 percent of its midday peak power from only solar and batteries. Tesla has a 20-year contractwith the island’s utility to provide power at 13.9 ¢/kwh. That compares with the utility’s electricity cost for diesel power of 15.5 ¢/kwh — and it’s nearly half the 27.7 ¢/kwh that Hawaiians paid last December for electricity.

Dirty energy is not only dirty, it is very expensive for an island. Nuclear power is expensive everywhere. Neither are resilient to extreme disaster.

Renewables are fast, clean, resilient, cheap — and getting cheaper every year. They are exactly what Puerto Rico’s grid needs.

After losing three-quarters of its homes and 1,100 people in the March 2011 temblor and tsunami, the city of Higashi Matsushima turned to the Japanese government’s “National Resilience Program,” with 3.72 trillion yen ($33.32 billion) in funding for this fiscal year, to rebuild.

The city of 40,000 chose to construct micro-grids and de-centralized renewable power generation to create a self-sustaining system capable of producing an average of 25 percent of its electricity without the need of the region’s local power utility.

The city’s steps illustrate a massive yet little known effort to take dozens of Japan’s towns and communities off the power grid and make them partly self-sufficient in generating electricity.

“At the time of the Great East Japan earthquake, we couldn’t secure power and had to go through incredible hardships,” said Yusuke Atsumi, a manager at HOPE, the utility Higashi Matsushima created to manage the local generation and grid.

Under a large-scale power system a “blackout at one area would lead to wide-scale power outages. But the independent distributed micro-grid can sustain power even if the surrounding area is having a blackout.”

The Resilience Program is mainly for building back-up capabilities for Japan’s cities and towns in the event of another disaster such as the earthquake and tsunami that caused meltdowns at the Fukushima nuclear power plant.

However, the Program has spurred the creation of micro-grids and distributed power generation across Japan that reduces municipalities dependence on large power plants.

Japan’s government ministries are seeking to raise the budget for the Program by another 24 percent for the fiscal year starting in April 2018, the cabinet office said last month.

The money earmarked for this fiscal year is going in part to the creation of smart energy management systems and distributed generation systems in towns across Japan.

“Since Fukushima, there has been a gradual elaboration of policies to realize that kind of local autonomy, local consumption paradigm,” said Andrew Dewit, a professor of energy policy at Rikkyo University in Tokyo.

Distributed generation uses small-scale power generation fueled by natural gas or solar and wind power arrays. Smart energy systems use the internet to connect appliances and meters to better direct electric power where and when its needed.

Higashi Matsushima has built its own independent transmission grid and solar generating panels as well as batteries to store power that can keep the city running for at least three days, according to Atsumi.

Companies in Japan are shifting their focus in response to the changes heralded by cities like Higashi Matsushima.

Taisei Corp (1801.T), one of Japan’s biggest construction companies, set up an energy strategy division this year to take advantage of the drive for smart energy systems.

The company is planning to double energy-related orders to around 120 billion yen over the next five years, focusing on renewables, energy efficient buildings and smart communities, a spokesman said.

Steps taken by cities like Higashi Matsushima were the brainchild of Takao Kashiwagi, a professor at the International Research Centre for Advanced Energy Systems for Sustainability at the Tokyo Institute of Technology.

He designed Japan’s first smart town and is the head of the New Energy Promotion Council that has paid out more than 100 billion yen in subsidies from the Ministry of Economy, Trade and Industry for smart energy communities.

“We are moving towards a day when we won’t be building large-scale power plants. Instead, we will have distributed power systems, where small power supply systems are in place near the consumption areas,” he said.

For a graphic on Japan’s energy mix, click: reut.rs/2f6XOIT