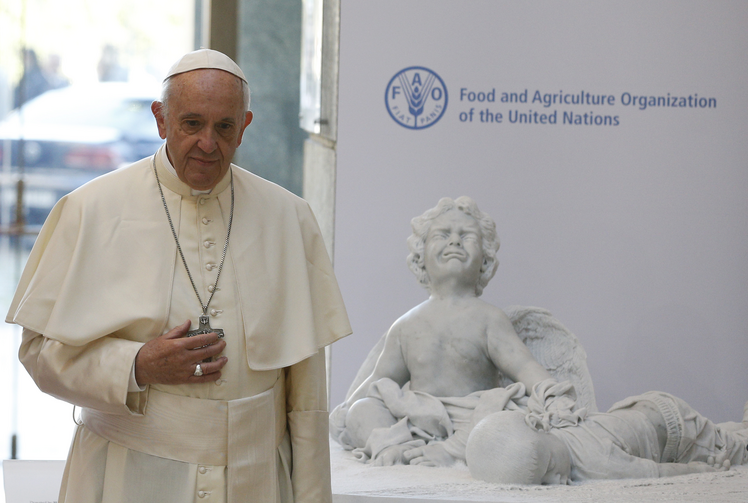 Pope Francis is pictured next to a statue of Alan Kurdi, the 3-year-old Syrian boy who drowned in September 2015 while crossing the Mediterranean Sea. (CNS photo/Paul Haring)

“It’s clear that wars and climate change cause hunger; let us stop presenting it as an incurable illness,” Pope Francis said in a powerful keynote address at the United Nations’ Food and Agriculture Organization on Oct.16.  He called on governments worldwide to take collaborative action to overcome the three interconnected plagues of conflict, climate change and hunger.

“In this situation, we can and we must change direction,” the pope said. “What is at stake is the credibility of the whole international system.” His audience included government ministers from the Group of Seven countries: Canada, France, Germany, Italy, Japan, the United Kingdom and the United States, as well as the ambassadors of F.A.O. member states and the organization’s top officials.

“The relation between hunger and migrations can only be faced if we go to the roots of the problem,” Pope Francis said, speaking in Spanish. He noted that studies conducted by the United Nations and civil society groups concur that to effectively address the problems of hunger and migration “two main obstacles have to be overcome: conflicts and climate change.”

He said international law has the means “for preventing and rapidly resolving” conflict and avoiding “famine and destruction of the social fabric.” What is needed is “goodwill and dialogue to stop the conflicts and a total commitment in favor of a gradual and systematic disarming [of the combatants], as envisaged by the Charter of the United Nations, as well as remedying the terrible plague of the arms trade.”

This remark was widely interpreted as a reference to President Trump’s decision to withdraw from the Paris agreement on climate change, which was adopted on Dec. 12, 2015, and signed by 195 parties. It has already been ratified by 168 states.

“It is necessary to strive for a concrete and practical consensus if one wishes to avoid the most tragic consequences that continue to fall on the poorest and most defenseless persons,” the pope said. He emphasized the need for a change in lifestyle, in the use of resources, in the systems of production and in consumption, especially regarding food, so much of which is lost or thrown away. He presented all the above as “the presuppositions” for any serious discussion about food security linked to the phenomenon of migration.

Francis first spoke at the F.A.O. headquarters in 2014, and he was invited again this year to give the keynote address on World Food Day, which has as its theme: “Change the future of migration. Invest in food security and rural development.” Every year World Food Day is celebrated on the anniversary of the establishment of the F.A.O. by the United Nations on Oct. 16, 1945, to cope with the problems of hunger, the displacement of peoples and poverty in the wake of World War II.

Pope Francis welcomed as “a sign of hope” the F.A.O. forecast that there will be an increase in “the global production of cereals, which will ensure greater world food reserves.” But he denounced the fact that “food resources are frequently exposed to speculation” and seen in terms of the economic benefit they bring to the big producers, rather than of the needs of the people. He warned that by acting in this way “conflicts and waste are favored, and the number of the poor who have to leave their homelands is increased.”

The pope noted that when faced with an increased demand for food in the world, some argue that it is sufficient “to reduce the number of mouths to feed.” He rejected this as “a false solution,” if one takes into account the amount of discarded food and the models of consumption that waste food resources. “It’s easy to reduce, on the other hand; to share implies a conversion, and that is demanding.”

Then looking at his audience, the pope said: “I ask myself, and you, too, this question: Is it exaggerated to introduce into the language of international cooperation the category of love, linked to that of gratuity, equality of treatment, solidarity, the culture of gift, brotherhood, mercy?” He explained that these words express “the practical content” of the word “humanitarian.”

Likewise, he said, “to love the brothers and sisters, taking the initiative, without hoping for a return” is a principle that is found in all religions and cultures and has been converted into “the principle of humanity,” which is part of the language of international relations.

Then, in what was seen as a reference to the nuclear accord with Iran, Pope Francis recalled that diplomacy has shown in recent times that “it is possible to halt the recourse to arms of mass destruction.” He said, “everyone is conscious of their capacity for destruction,” but, he asked, “are we equally conscious of the effects of poverty and of exclusion? How are we to stop people who are willing to risk everything, entire generations who can disappear because they lack their daily bread or are the victims of violence and climate change?”

Next, in a message that appeared directed to governments, Pope Francis said: “They cannot be stopped by physical, economic, legislative or ideological barriers. Only the coherent application of the principle of humanity can do that.”

Francis noted that today public aid for development is being reduced and international agencies are being limited in their activities, while governments pursue bilateral agreements “that subordinate cooperation to the respect of particular agendas and alliances” or to a “tranquility of the moment.”

He made clear, however, that “the management of human mobility requires coordinated and systematic intergovernmental activity, conducted according to the existing international norms and permeated by love and intelligence.” The aim of this is to bring about “the encounter of peoples” and “to generate dialogue and union, not exclusion and vulnerability.”

He told his audience that “the burden of misery caused by the often tragic movement of migrants can be removed through a [program of] prevention, made of projects of development that create jobs and the capacity to respond to climate and environmental changes.” He reminded them that “prevention costs much less than the effects caused by the degradation of lands and the pollution of waters, effects that hit the nerve centers of the planet where poverty is the only law, diseases are on the increase and the hope of life is diminished.”

Francis spelled out several concrete steps that need to be taken by governments and the international community at a moment in which hunger is on the rise for the first time in decades, with 815 million people suffering from chronic undernourishment and millions of migrants worldwide, as the F.A.O.’s director general, José Graziano da Silva, told the pope in his welcome address.On climate change, Pope Francis said, “We see the consequences every day,” but “thanks to science, we know how to face these problems.” He recalled that “the international community has already drawn up the necessary juridical instruments such as, for example, the Paris accords, from which, unfortunately, some are distancing themselves.”

In practical terms, Francis said, to love means “to contribute so that each country increases production and reaches self-sufficiency in food.” To love means “to think new models of development and consumption and to adopt policies that do not aggravate the situation of populations that are less advanced or their external dependence.” To love means “not to continue to divide the human family between those who have a surplus and those who lack the bare necessities.”

…a U.N. report published last month that found worldwide hunger, fueled by conflict and climate change, is on the rise for the first time in more than a decade.

The report found that in 2016, malnutrition and food insecurity affected 815 million people, or 11 percent of the global population, up from 777 million the previous year. It also raised concerns that the global communitiy will fail to reach the U.N. sustainable development goal of eradicating world hunger by 2030.

“The biggest problem we have today is war, man-made conflict,” said David Beasley, executive director of the World Food Programme (WFP). “Eighty percent of the expenditure of WFP—over 6 billion dollars—is in man-made conflict zones like Syria, like Iraq, like Somalia…. We will never achieve Zero Hunger by 2030 until we end conflict.”

Madagascar president Hery Martial Rakotoarimanana Rajaonarimampianina, whose nation is facing the impacts of climate change, also spoke at the event Monday.
“Young men and women are the most affected by (climate change-related) population displacements,” he said. “If we want to change the paradigm of migration, we need to find solutions in the countries of origin.”

“More and more people migrate because they do not have the option to remain in their homes and lands,” said FAO Director-General José Graziano da Silva, who also lamented the root causes of migration too often ignored.

“How do you stop people who are ready to risk everything, entire generations that can disappear for lack of their daily bread, or because they are the victims of violence or climate change?” the pope posed in his speech.

“They go where they see light, or sense a hope of life. They cannot be stopped by physical, economic, legal, or ideological barriers: only a coherent application of the principle of humanity can do that,” he said, perhaps referencing attempts by Trump and Europeanleaders to enact stricter refugee rules, and even a wall along the southern U.S. border.

“The organization of human mobility demands coordinated and systematic intergovernmental action,” he concluded, “based on existing international norms and permeated with love and intelligence.”

This work is licensed under a Creative Commons Attribution-Share Alike 3.0 License