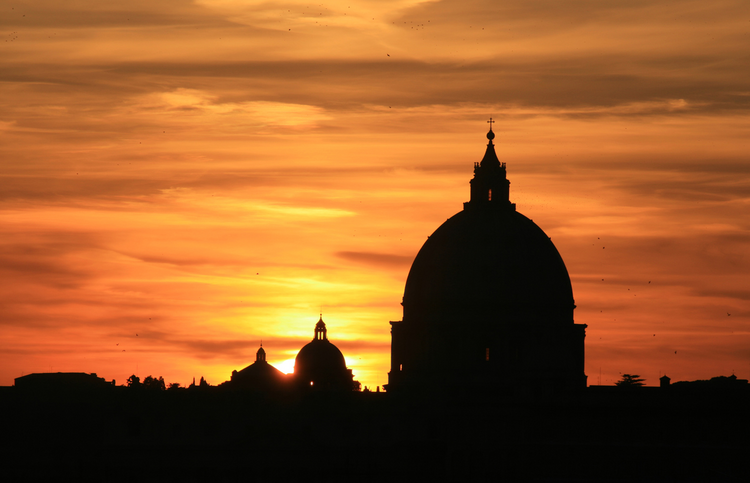 It has been something of a banner year for an international effort to effect a global ban on nuclear weapons. This year the Nobel Peace Prize was awarded to the International Campaign to Abolish Nuclear Weapons (ICAN). In July a treaty toward that end was adopted by the U.N. General Assembly with the approval of 122 voting members, two-thirds of the global body. Though the United States and all of the world’s other nuclear powers are united in their resistance to it, the Treaty on the Prohibition of Nuclear Weapons has already been signed by representatives from 50 nations and ratified by three states, among them the Holy See.

Continuing the momentum this week will be the opening of a first-of-its-kind conference, “Prospects for a World Free from Nuclear Weapons and for Integral Disarmament.” Sponsored by the Vatican, this two-day, high-level international symposium begins on Nov. 10. Participants include 11 Nobel Peace laureates, top United Nations and NATO officials, and leading scholars and representatives from major foundations, civil society organizations and bishops’ conferences.

Nuclear weapons disarmament and abolition are issues of acute personal interest to Pope Francis, according to Drew Christiansen, S.J., a Georgetown University professor and former editor-in-chief of America. He can cite a number of recent instances that demonstrate the pope’s engagement on nuclear weapons, beginning with a personal appealto ban the bomb in a letter to an ICAN conference in Vienna in December 2014, a flurry of Vatican statements in recent years and the pope’s historic address to the United Nations in September 2015.

“He clearly wants to make this part of the church’s global agenda,” says Father Christiansen.

In his 2017 World Day of Peace message, Pope Francis wrote: “An ethics of fraternity and peaceful coexistence between individuals and among peoples cannot be based on the logic of fear, violence and closed-mindedness, but on responsibility, respect and sincere dialogue. Hence, I plead for disarmament and for the prohibition and abolition of nuclear weapons: nuclear deterrence and the threat of mutual assured destruction are incapable of grounding such an ethics” (5).

Some media accounts of the upcoming conference suggest that it could provide an opportunity for Pope Francis to personally intervene to reduce rising tensions between nuclear powers North Korea and the United States—a prospect Vatican officials have vigorously downplayed.

Father Christiansen considers talk of such an intervention a “deflection.”

“You look at the nearest crisis to avoid doing what you need to do in the long run,” he explains, although he did acknowledge the pope indeed may have some influence on the position South Korea’s Catholic President Moon Jae-in may adopt as sparring by the United States and North Korea intensifies.

Since 1963’s “Pacem in Terris,” the church has considered the use of nuclear weapons morally indefensible because their deployment would obliterate “just war” principles of proportionality and noncombatant immunity. But it had allowed some wiggle room for nuclear deterrence as a defensive posture as long as it was part of a long-term strategy toward disarmament. In recent years the Holy See has taken a more critical stance on deterrence itself. Noting the lack of progress on disarmament and pointing to the many geopolitical, social and environmental hazards of the deterrence model and the maintenance of thousands of nuclear weapons it demands, the Vatican has come to believe deterrence itself is immoral.

On this matter the Holy See may be getting out ahead of its bishops’ conferences, says Father Christiansen.

On the bomb’s abolition, he says, “We have not had that flurry of statements from bishops’ conferences like we had in the 1980s” on peacemaking. But Father Christiansen is hopeful that the Vatican symposium this week represents the beginning of a coordination of Catholic universities, institutions and bishops’ conferences on this issue. A pastoral plan to advocate and educate people about nuclear weapons abolition could be one long-term outcome. U.S. and other bishops’ conferences “have to talk about what their pastoral process might be,” he says, “whether that’s a new statement, public advocacy or an education plan, but it has to be something that gets down to the parish level to really move people.”

ICAN’s Nobel Prize has certainly raised the profile of nuclear disarmament, but Father Christiansen is unsure how well acquainted many U.S. Catholics might be with the issue, or even where the church stands on nuclear weapons. “I think they have probably picked up signals that the church has been moving in a more pacific direction, but I wonder if they even know about the ban treaty.”

No More Nukes?: A new movement argues it is time to finally ban the bomb.
Kevin Clarke

Of this week in Rome, he says, “I hope that we get a younger generation of students and young scholars to take up this issue, and I hope that different sectors of the church will be able to network there, so the whole church can be really active on this issue.”

For his part Father Christiansen will be focusing on developing a way to approach the issue of abolition and disarmament as a moral responsibility for scholars and scientists, especially those just war specialists who still strain to rationalize the actual or threatened use of nuclear weapons. The potential of such weapons, he argues, cannot be adequately conformed to “just war in the ordinary mode.” Nuclear weapons simply represent “really a burden and a curse we need to get rid of.”

The Holy See’s Dicastery for Promoting Integral Human Development is the sponsoring office for the conference. Father Christiansen is confident its participants will begin an examination of the moral and practical trade-offs associated with nuclear weapons, as well as the ongoing need for investments in economic and human development across the world.

That “integral” approach has become especially important in recent months. The United States, China and the Russian Federation are each on the precipice of major nuclear weapons modernization programs that could cost trillions of dollars, a spectacle in spending the church has regularly deplored as a moral scandal.