Without a clear policy plan from President-Elect Donald Trump, the nation’s energy future hangs in the balance. But in a year that saw an influx of state-level ballot initiatives targeting action in the energy sector, a murky (or hostile) federal landscape will only deepen calls for action in statehouses and city halls.

Despite the unclear future, we share a few things we’re thankful for this year. These policy plays prove it’s possible — at the local level — to overcome obstacles to renewable energy generation, local ownership, and widespread access to both. 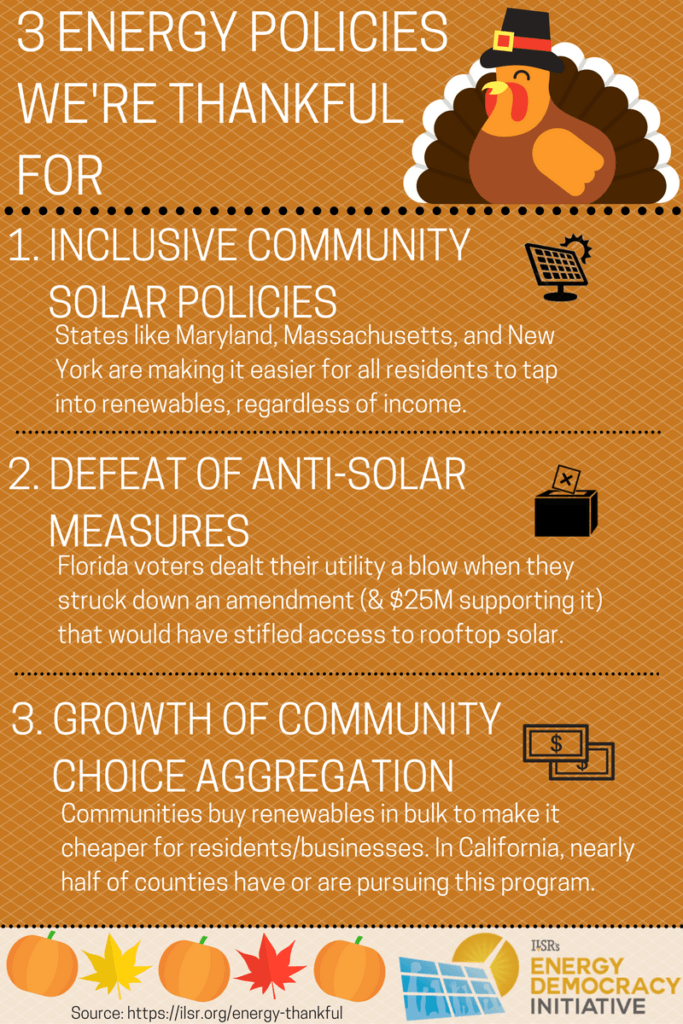 State-level community solar policies are paying off, expanding solar access to residents otherwise unable to tap into renewable generation. Such projects are critical to reach renters and low-income households, in addition to homeowners with shaded roofs.

The state’s shared renewables program includes an extension of its net metering policy to centrally located renewables projects up to 2 megawatts (MW). The plan also qualifies subscribers to community-owned arrays for retail-rate reimbursement for the power they generate.

A two-phase rollout that began last year provides incentives for projects located in areas with a need for new capacity, and for projects that cater to low-income residents. The program opens the door for renters to cash in on New York’s solar boom — the state saw a 300% jump in its solar capacity between 2011 and 2014.

As of the second quarter of 2016, the state’s solar pipeline was bursting with nearly 2 gigawatts of proposed solar generation, much of it community solar.

In Maryland, regulators finalized rules for the state’s community solar “pilot” in June. aimed at diversifying participants. The state saw its first community energy projects go online more than a half-decade ago, before any state had a real policy to encourage them. Now, Maryland intends to stoke growth statewide in community solar.

The program rules answer a legislative directive to create a 200 MW community solar pilot program with incentives for low- and moderate-income subscribers, plus a carve-out for projects on brownfield sites or carports. Community solar subscribers will receive credits that give full retail value for power produced on site.

Given the recent adoption of rules, no projects have been completed yet, but the future is promising.

Explosive solar growth in Massachusetts has prompted the state to raise its net metering cap multiple times over the past several years. Community solar projects make up as much as one-third of the commercial solar project queue, thanks in part to historically friendly policies. The state required utilities to implement virtual net metering and prohibited utilities from imposing extra fees on all net-metered projects.

That framework molded Massachusetts into a leader in community solar, making it one of the most solar-rich states in the U.S.

Legislation passed in April increased the state’s net metering limit, but rolled back some of the financial benefits. The tweaks reduced reimbursement rates for most new projects, although they favor community solar projects that cater to low-income residents or affordable housing complexes.  A proposed replacement for the state’s solar renewable energy credit incentive program may help to fill the gap, although it won’t take effect until mid-2017 at the earliest.

Florida voters dealt powerhouse utilities a major blow when they struck down a controversial amendment that would have severely stifled homeowners’ access to rooftop solar. Disguised as a consumer-oriented provision, the measure would have continued utilities’ assault on distributed solar despite substantial market potential.

Ahead of Election Day, utilities shelled out more than $25 million in the amendment campaign, reinforcing their high-stakes resistance to renewable generation and local control. That money shaped a strategy explicitly aimed at deceiving voters — at a closed-door meeting, one supporter called the amendment language “a little bit of political jiu-jitsu,” according to a leaked recording.

Voters’ opposition, coupled with the widespread beating the amendment took in the media, underscore Floridians’ appetite for a power system shakeup. Already, news stories point to a potential solar boom.

Florida remains some of the most fertile ground for solar growth.The state currently has the third-most rooftop solar potential in the US, but thanks to intransigent investor-owned utilities it ranks only  No. 14 in installed capacity.

A process through which cities and counties can harness more purchasing power to procure clean energy continues to pick up steam, especially in California, where nearly half of all counties are now either participating in or considering such a framework.

(See ILSR’s Community Power Map for information on community choice aggregation programs in the seven states that allow them.)

Community choice aggregation, is emerging as a favorite tool for cities chasing all-renewable electricity generation. Incorporated into several long-range plans, and on deck for others, it puts the cities in charge of choosing electricity sources for all residents and businesses, enabling them to focus more heavily on renewables and locally generated power than a non-local utility.

Sonoma Clean Power, a pioneering program in California’s Sonoma County, exemplifies the benefits. Launching in 2014, Sonoma Clean Power delivers power that is both greener and sourced closer to home, and at a lower cost than power from incumbent utility Pacific Gas & Electric. At the outset, the effort kept $180 million in the local economy while increasing customers’ average share of renewable energy by 50%.

The expanding network of community choice aggregation programs in California prompted six existing systems to form a nonprofit trade group in 2016 to both support providers and advocate for utility customers. It’s a promising development for a tool of local control that faced a massive utility-funded opposition effort when it first launched over a decade ago.

We’ll be watching with interest as local community choice efforts grow in California and across the country.

What energy efforts are you thankful for this year?

For timely updates, follow John Farrell or Karlee Weinmann on Twitter or get the Energy Democracy weekly update.