Marta, a consecrated women in Regnum Christi, is the new (actually, the first) director of the office of women’s issues in the Vatican Dicastery for Laity, Family and Life. It is a new dicastery, created by Pope Francis in 2016, and its prefect is Cardinal Kevin Farrell. And all Marta has to do is help the Church understand women and their appropriate contribution to the world, what it means to be a woman in the world today, and where women are going in the future.

It is a BIG task, but Marta comes to this job after serving as director of the Institute for Higher Women’s Studies (Istituto di Studi Superiori sulla Donna) of the Regina Apostolorum Pontifical Athenaeum in Rome. She is most certainly a feminist, but not the sort you might find leading a protest in the street, throwing rocks, and shouting profanities. No, Marta Rodriguez is a feminist in the heart of the Church, with a heart like Mary.

“This assignment indicates a call from the Church, which for me is a call from God,” Marta said. “I feel very small for this mission, but I sense an interior certainty that God has prepared my heart for this new service he has called me to. Since 2000, I’ve worked continually on women’s issues, both in studies and in action on various projects, one of the most important of which was to help in the founding of the Institute for Higher Women’s Studies in 2003. This institute was born in order to promote the feminine genius, which John Paul II asked for.

“I believe that one of the great challenges for modern women is to discover what it means to be a woman. Once a woman discovers who she is, she ends up discovering the feminine richness; she can contribute to the cultural world and the ecclesial world with much more dedication, much more bravery, much more freedom.

We caught up with Marta a few months after she dove into her new assignment, to get her perspective on how she reached this point and how the work is progressing. She agreed to answer a few questions…

Why were you asked to take on this new assignment?

I had an interview with Cardinal Kevin Farrell, our Prefect, in February 2016. He asked me to take this job. I could not refuse because I felt deep inside that God was calling me to serve here. I accepted, saying that I thought God had prepared my heart for this assignment. It was not a matter of skills or competencies… those are never sufficient for something like this. I felt called to take this new responsibility with Mary’s heart. Maybe that is my biggest contribution. I asked to maintain the direction of the Institute for two more years so I had time to prepare the new directress, and I was allowed. And I need to keep studying because last year I started my Doctorate in Philosophy at the Gregorian University.

The dicastery is just a year old — how is it taking form?

We are forming the team. There are still many open spots in the organization, beginning with the sub-secretaries that we are still waiting for. Our Secretary just arrived on the first of September. So it’s a time of resetting and growth. The Pope visited us in late October, and he encouraged us to work with a new mentality, to widen our horizons and listen to the current pulse of the world, so we can preach Christ in new ways. I think this is the atmosphere and intention of all of us.

What are the biggest sources of joy and reward in the job?

I enjoy having such wide horizons, the whole Church! The whole world! Until now I have had a very European view and mentality. Now I am learning to listen to the needs and requests from Africa, Asia, America. That is a big stimulation and very enriching.

I have always enjoyed learning, especially encountering people. I say that I have learned more from people than from books (even if study is so important!). My new position gives me a wonderful window to the world, and so many opportunities to learn.

What are the biggest challenges — even disappointments?

It has been hard for me (and it is still) to detach myself from the university and the people there. The university is like a family for me. I have received a lot of inspiration and motivation from Mary. She became the Mother of the Church when she had only the treasure of her heart with her. I felt something similar when I started to work in the Dicastery. I was called to bear fruit from the Heart of the Church, and that life passed through the little offering of my heart.

I also struggle with rhythm and time. Life in the Vatican has a very different rhythm than outside. Everything needs to be very well thought, analyzed. Now I am not just Marta, but I represent the Holy See. That requires prudence, and decisions require more time. I am not used to that and I get impatient, wishing that things could happen more quickly. I have so much to learn. 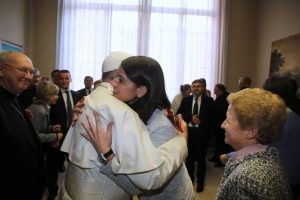 You have spent the past 17 years working on “women’s issues” — what does that mean?

I first started giving a conference to married women on femininity, explaining it from our body. I was very impressed with how much they were moved at an existential level. I realized that today women don’t know the significance of being a woman. It is a problem of identity. So I developed a course and have given it in different forms to university students, nuns, consecrated women. That led me to develop also the idea of the importance of integrating the sexual and affective dimensions in consecrated life, and in the last two years, I have given seven intense courses on that theme to different religious groups. It has been a beautiful experience of the Spirit. I have the thesis that consecration has to be a way to fulfill and make flourish all our femininity. When we are “less woman” we don’t live our consecration to the full. In these courses I have seen the Holy Spirit act deeply in the heart of my sisters, making all things new.

And as a consequence, I have developed this course for priests and seminarians and given many conferences and courses to groups of them. I think this is the part of my mission that I enjoy the most.

Are you a “feminist”?

There are so many types of feminism that I think I can identify myself with some of them, and not with others. If I am a feminist that means for me that I believe deeply in the feminine genius and that I see how much is needed in the family, in culture, in politics, science. But I don’t like talking too much about women, or just with women. I think it is time to reflect on the meaning of being a woman and a man, but together.  I prefer mixed teams rather than teams formed just by women or just by men. I think that culture and work need the contribution of both together, of the synergy of both. We easily recognize that, but there are so many barriers that block this synergy. I agree in removing those barriers (inside and outside the Church), but I don’t agree with the dialectical interpretation of them, that concludes that men are naturally a source of violence and submission.  I think we find our identity in the encounter with the other, and that just together we are truly creative.

Has the Church treated women as second-class citizens?

Sometimes in history, yes. The Church is the Mystical Body of Christ, but it is also a human institution. It is not free of the culture where she lives. In our days I would say that the Church as an institution recognizes the dignity of women, and does not consider them as second class citizens at all. A quick view to the teaching of the last four Popes would be enough to prove it.

But one thing is theory and another is life. There are still many cultural barriers and fears. I think we have an important educational challenge ahead. This is one of the points I feel as part of my mission, to promote the collaboration of men and women inside and outside the Church. To do that we need to educate both, priests, religious and lay people, to the proper relationship.

What do you see as the vital role for women in the Church?

Each one of us is a vital member of the body of Christ. As a woman, I bring a different perspective than a man. A woman brings, yes, feminine genius and a spiritual motherhood. So rather than see the vital role for women as being particular jobs, titles or positions, I believe the truly vital role is to truly be women in the heart of the Church, nurturing, love, leading, following – as Mary did. 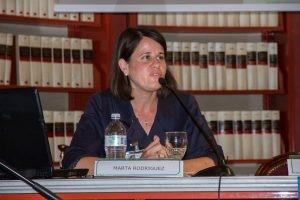