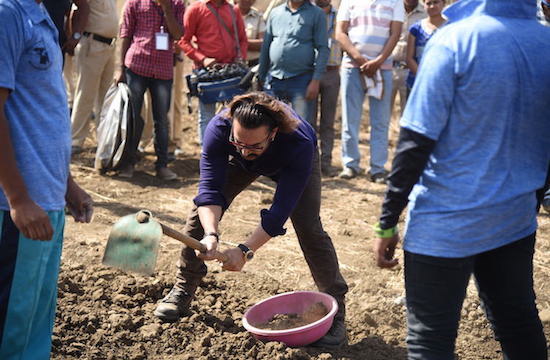 Bollywood actor-producer Aamir Khan digs a trench as part of his program that aims to help villagers better manage their water supplies. (Photo supplied by the Pani Foundation)

Over 150,000 college students from drought-prone western Indian cities joined Khan on May 1 to dig trenches ahead of monsoon rains in more than a 100 villages across 24 drought-prone districts of western Maharashtra state.

Saurabh Vishal, a student from Symbiosis International University in Pune, said he was proud to be helping out.

“It was like doing something for the nation, for the village and our people,” said Vishal who assisted digging of trenches at Savargaon village in Parbhani district.

“I felt honored to join villagers in their hard work to make their village drought-free,” the 25-year-old told ucanews.com.

It’s all a part of the actor’s non-profit Paani (water) Foundation which he established in 2016.

Khan said it takes about 45 days of effort to prepare a drought-prone village for water conservation. The method used requires the digging of trenches to allow rainwater to collect and seep into the earth where it will help replenish over exploited water levels.

The work will be completed this month in order to be ready for the June-September monsoon season. The water percolation and collection will make the village self-sufficient in water for the following summer.

The Paani Foundation works with the Watershed Organization Trust (WOTR) as its “knowledge partner.” WOTR provides both technical support and training to the foundation, said Khan.

The actor-producer said he appreciated the pioneering water conservation work carried out by Swiss Jesuit Father Hermann Bacher who founded WTOR with Crispino Lobo, a former Jesuit priest in 1993.

WTOR was set up to help villagers fight drought in arid regions and is now active in eight Indian states.

The idea ‘Shramdaan’ of seeking free physical labor for water conservation “was conceived and implemented by Father Bacher in 1980s which inspired the other volunteer groups to follow suit,” said Lobo.

In Maharashtra, more than half of its 43,665 villages were declared drought-stricken in 2016.

“Our dream is to make Maharashtra drought-free in five years,” Khan said.

“We found that wherever the water issue had been solved, the solution lay in people’s collective efforts and labor,” Khan said.

As preparation for the work, five people from each participating village will be trained. They in turn teach other villagers water conservation methods including how to best collect rainwater.

Khan’s foundation has been attracting villages to be a part of the program through a competition offering huge prize money.

Satyajit Bhatkal, the foundation’s executive officer, said the top three villages will get cash prize equal to US$115,000, US$76,000 and US$61,000 for first, second and third place holders.

The competition involves designing a water conservation project by digging bunds, trenches and artificial lakes through free labor to collect the rainwater, and conserve it in the village and on farmland.

The participating villages also carryout soil testing and treatment to retain moisture and budget water usage. The villages win the prize based on the maximum work they do for watershed conservation and water management.

Khan said the state government has been supportive in granting permission wherever required, especially when watershed work needs to be carried out in forests.

But Khan is doing what government should have done, said Abraham Mathai, a Christian leader and former vice chairman of Maharashtra State Minority Commission.

Khan is “doing what no other film actor has ever done to protect, preserve and nurture environment, especially making drought-prone villages in Maharashtra,” he said.

The foundation is funded by large corporate firms in India and has an annual budget 450 million Indian rupees (US$7 million), said Khan.