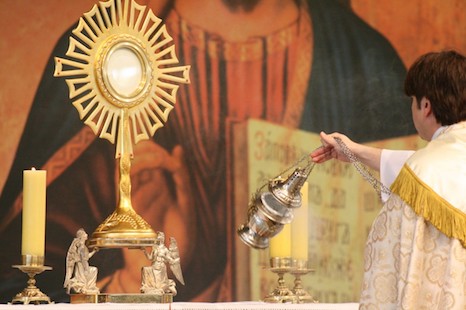 The fault lines between different religious worldviews within Western Catholicism are currently being redefined around the so-called “life issues”. We see among liberals the resurgence of Cardinal Bernardin’s “seamless garment” argument, while conservatives insist that abortion is the only defining moral issue. This rift conceals a larger and deeper reshaping of the entire ideological landscape of Catholicism, but most particularly on the conservative side.

Liberal-progressive Catholic culture in mainstream media and in academia is perceived (and to a large extent perceives itself) as the new status quo, the establishment and the gatekeeper. When those of this leaning peer from their windows to see what is happening in the streets, they tend to see merely a revolt when there might actually be a revolution going on.

This explains the reluctance of liberal-progressive Catholic culture to engage theologicallywith the neo-traditionalist Catholic movement and the temptation of the former to dismiss the latter. This temptation can be explained by the fact that old school, Roman-theology Catholic conservatism no longer exists. Today’s Catholic neo-traditionalism has very little in common with 20th century theological, institutional and ecclesiastical Catholic conservatism.

There are no Cardinal Ottavianis or Cardinal Ratzingers among the ranks of today’s anti-liberal and neo-traditionalist Catholic thinkers. The age of giants in Catholic theological thought is over on both sides because the globalization of Catholic theology has leveled the profiles in the “who’s who” of the contemporary intellectual tradition. French and German theologians no longer dominate the Catholic debate. And, more importantly, a metamorphosis is underway within the Western Catholic intellectual revanche: there is a movement to regain lost territory. Liberals should not look at this as an ephemeral moment that will be reabsorbed by a mainstream, because the mainstream no longer exists.

A simple way of deciphering the face of today’s Catholic revanche is to look at the map of the opposition to Pope Francis. As I wrote previously in La Croix International, there are three main kinds of opposition to the present pontificate. There is a theological opposition nostalgic of the John Paul II-Benedict XVI paradigm; then there is an institutional opposition that is trying to defend the ecclesiastical and clerical status quo; and, finally, there is a social-political opposition, which is concerned with the political-economic sustainability of a pontificate that is radically on the side of the poor.

But if we look at the political and cultural center of the opposition to Francis in global Catholicism, that is the United States, there are a few distinct streams that we must try and identify in order to understand this Catholic conservative drift.

The first stream, in chronological order, begins as a reaction to Vatican II and especially to the early reception of the theology of the council under John Paul II and Cardinal Joseph Ratzinger-Benedict XVI. It is the post-liberal theology project, as spelled out recently by R.R. Reno, editor of First Things.

A second stream is connected to the first, but more in the direction of an evangelicalization of Catholicism. Not without an anti-intellectual animus, this stream counts on intellectuals popular among young militant Catholics, such as George Weigel and Bishop Robert Barron. These figures constantly caution about the dangers of liberal intellectualism for a Christian faith that is too open to modernity. The idea is to free Catholicism from the utter complexity and paradoxes of conciliar theology, in order to rediscover the beauty and simplicity of the Catholic truth, often in triumphalist tones.

The voice of Jacques Maritain in his 1966 book The Peasant of the Garonne – convoluted theological architectures cannot really substitute the call to fight against the crisis of Christian faith in modernity – finds an echo in this stream of Catholic traditionalist-conservative culture today. The neo-traditionalist movement for the “reform of the liturgical reform” is, in its own way, part of this evangelicalization of Catholicism, and not just some sort of nostalgia for 19th-century Catholicism.

The third and fourth streams are more recent and evidence of the radicalization of the Catholic traditionalism. There is the anti-institutionalist Catholic insurgency, starting with the conviction that most of the present Catholic establishment and its leadership – clergy, intellectuals and politicians – have shown a fundamental weakness and inability to respond to the challenges before the Church – secularization, culture wars, Islam, the sex abuse scandal and so forth.

It is a traditionalist Catholic culture that is not longer really conservative. Rather, it is an insurgency. In order to keep Catholicism as it used to be, the present ecclesiastical establishment must be smashed. It is the church of “the Benedict Option” and of the other such options. Here one recalls the words of Prince Salina in Giuseppe Tomasi di Lampedusa’s novel, The Leopard: “If we want everything to stay the same, everything has to change.”

The all-out campaign against Pope Francis – which started immediately at the outset of his pontificate in 2013 and not with Amoris Laetitia in 2016 – is part of this strategy. The goal is to get rid of this ecclesiastical establishment perceived to be compromised with liberalism and the expression of conciliar theology, and then wait for the new recruits currently in seminary to replace the clergy that was formed in a pre-John Paul II Church.

Part of this insurgency is seen in the wave of new contemplative orders that attract millennials. It has the effect of rebalancing the social activism of post-Vatican II religious orders, some of which are now facing extinction before the end of this century (at least in the Western and Northern hemisphere).

The fourth stream of this conservative drift is a Catholic critique of globalization as globalism, which takes the form of anti-internationalism and sometimes even of ethno-nationalism and nativism.

Catholicism in the 20th-century, following two World Wars, was deeply internationalist because internationalism was one of the usable leftovers of 19th-century Romanism, papalism and anti-nationalism. Old-school Catholic conservatism used to be internationalist and ultramontane. It embraced not only Roma locuta, causa soluta, but also the universalist idea of the superior moral authority of the Catholic Church in world affairs.

But this new, 21st century Catholic revanche associates Catholic internationalism with a naïve or, worse, willing complicity with heartless economic globalization, secularization, indifferentism towards other religions and with Vatican II-style optimism. This new traditionalist culture has a sense of cultural supremacy of the Western and northern-hemisphere form of Catholic orthodoxy as opposed to the forms of European or Latin American Catholicism, and of course as opposed to the form espoused by Pope Francis.

The neo-traditionalist drift from moderation to extremism

This brief taxonomy of different streams within the new Catholic traditionalism is not exhaustive and could probably continue. The objective is not to identify with microscopic precision other streams, but to understand what this phenomenon means.

There are evident parallels between this metamorphosis of conservative religious culture in the Catholic Church and the trajectory of political conservatism. In a book published in 2012 (four years before Trump’s conquest of the White House), Geoffrey Kabaservice analyzed the changes in the nature of the Republican Party in the United States over the last fifty years – conservativism’s drift from moderation to extremism.

I believe there are interesting parallels between the collapse of moderatism and establishment within conservative politics (and not only in the United States) and the end of old school, institutional Catholic conservatism. This drift explains the radicalization of the opposition to Pope Francis and the casting of him as a liberal pope – something necessary if one’s long-term project is a post-liberal Catholicism.

Vatican II Catholics have to take this phenomenon seriously and not delude themselves into thinking that this neo-traditionalist drift represents just a small minority in particular areas of the world, which will go away or remain marginal and ineffective. Yes, it is a minority that is geographically isolated. But I do not think it will remain that marginal or that it will go away.

Global Catholicism is full of unknowns and surprises. The possibilities opened by the “world Church” of the Second Vatican Council can be used in ways different from the established interpretation of the early post-Vatican II period, and are sometimes used even against the theology of the council.

It is not clear if this intra-Catholic traditionalist insurgency will give us a permanently divided Catholicism or an all-out reversal of conciliar theology and a return to a pre-Vatican II Church. The latter scenario is unlikely. I do not believe it is intellectually, theologically or spiritually sustainable to have a Catholic Church in opposition to Vatican II or one that rejects the theology of the council. This is not only because Vatican II is not what anti-Vatican II extremists think it is, but also because not all Catholic neo-traditionalists embrace the ideological extremism of those who reject not just the spirit of Vatican II but also its documents.

This delicate moment in the reception of Vatican II coincides with two different and, to some extent, colliding currents. The paradigm shift that Pope Francis in bringing about is on a collision course not only with the anti-Vatican II sentiment but also with something I would call the conciliar agnosticism of millennial Catholics and their mentors, those who have a far less optimistic view of Vatican II’s potential for theological synthesis.

This moment is part of the ever-bumpy road to the reception of ecumenical councils. Judging by what happened with the reception of the Council of Trent, one can say that the reception of Vatican II has just begun. Whatever Vatican II Catholics think about the coherence between the council and the post-conciliar Church, and about the betrayal of Vatican II by the institutional Church, it is hard to deny that conciliar theology has become the cultural and theological Catholic establishment.

Now it is time to take into account the neo-traditionalist insurgency against this establishment and imagine where we go from here.