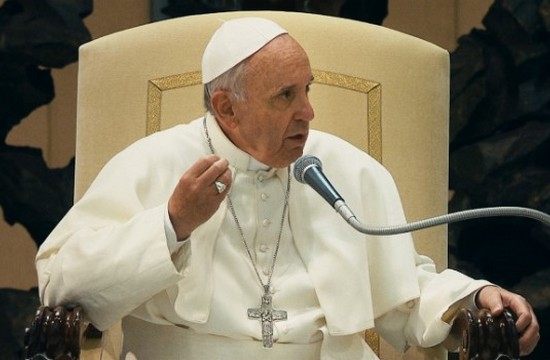 Pope Francis: A Man of His Word

German director Wim Wenders’ documentary on Pope Francis is far from a simple exercise in communication by a pope who believes in the force of his own words.

It is also the outcome of a meeting of minds between Wenders, a great film maker, who has now extended the series of documentaries he began with Nick’s Movie in 1980, and Jorge Mario Bergoglio, a man destined for great things, who became the 266th Sovereign Pontiff of the Catholic Church on March 13, 2013.

The project was launched and co-produced by the Vatican, at the risk of causing it to be written off as an exercise in self-promotion.

At the Cannes Film Festival where the film was shown, however, Wenders forcefully insisted that “the film is my film.”

Indeed, he had been given “carte blanche” to write and direct it, he said.

As with his earlier documentaries, which dealt with his love for music (Buena Vista Social Club), photography (The Salt of the Earth on Sebastião Salgado) or dance (Pina), Wenders’ latest film is primarily an exercise “in admiration” of a special pope by a faith and culture-filled film maker.

Wenders, who abandoned Catholicism to become a Protestant, holds two honorary doctorates in theology from the Universities of Louvain and Fribourg.

“The texture of the film is my love and respect for the courage of this man ever since he appeared on the balcony of St. Peter’s,” Wenders explains.

“So, I have attempted to step back to allow him to come forward,” he says.

This effort justifies the film’s empathy and its lack of any critical dimension, which might concern some viewers.

Wenders’ film is not a biography of Jorge Mario Bergoglio and still less is it an exegesis of his pontificate.

Rather the film chooses to emphasize the force and the meaning of Pope Francis’ message, which calls for a return to the essentials, the search for the common good, and the resonance of that message with the concerns of our time.

Watch the official trailer of “Pope Francis – A Man of His Word.”

Wenders’ own commentary serves as a conductive thread in the documentary. He thus draws a parallel with Francis of Assisi, the “reforming and revolutionary” saint, whose name the pope bears, and who promoted poverty and harmony with nature, and whose life is evoked in scenes short in old-fashioned black and white.

Didactic in his desire to embrace the whole of the pontifical message, Wenders draws extensively on the Vatican archives.

He shows us the pope alongside migrants in Lesbos, with the poor in the favelas of Rio, washing the feet of prisoners in the United States, criticizing “the globalization of indifference” and the unequal sharing of wealth that makes “poverty an outrage,” or promoting dialogue with Muslims.

In addition to these public statements, which have been widely shown in the media, Wenders also adds a new dimension.

Through the four interviews he was granted, Wenders offers a rare and more intimate image of Pope Francis.

Filmed in close up using a special technical process, Pope Francis appears to look us in the eye and to address each one of us.

It is a moving discussion in which the pope deals in simple language with questions concerning our daily lives.

These include tolerance, listening to the other, spirituality, the family, the acceleration of time, as well as the need to combat materialism and to reconcile ourselves with our own death because “we are not machines.”

For Wenders, it is less a matter of glorifying the personality of the pope than giving a voice to a man who has chosen to make his words a weapon for meeting the challenges of our era.