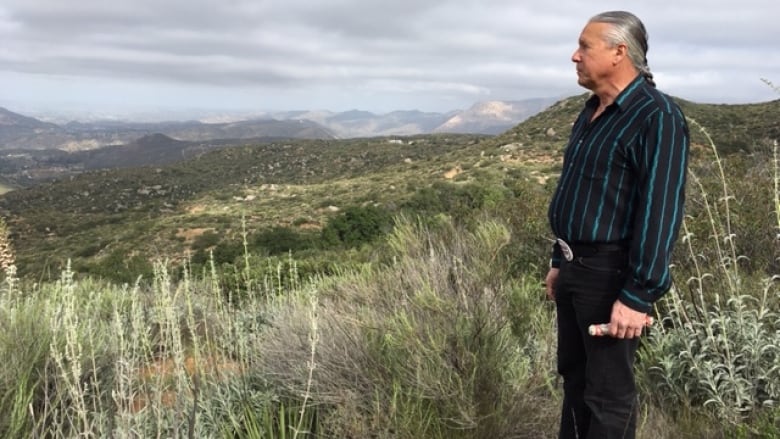 Newcomb, who is Shawnee/Lenape and author of Pagans in the Promised Land: Decoding the Doctrine of Christian Discovery, said the bulls might be old, but they’ve influenced everything from how we treat the planet to the issue of missing and murdered Indigenous women.

He described the doctrine as the idea that the first Christians to locate land inhabited by Indigenous peoples had a “right of domination” over those lands and peoples.

“We got in the habit of calling it the ‘doctrine of discovery,’ but what I’ve learned from studying those documents … is that it’s really the doctrine of domination,” he said.

That emphasis on domination is important, said Newcomb.

When you look at the residential schools and the boarding schools in the United States, these are a direct consequence of the idea that there was a right of domination over our nations and peoples.– Steven Newcomb , author

“Words constitute reality,” he said. “It’s not just that we use words to describe reality. We’re creating reality on an on-going basis. And when we understand that, if we’re using terms of domination and dehumanization, then we’re constructing that type of reality.”

Newcomb said the doctrine of discovery became enshrined in the laws of countries like Canada, the U.S. and Australia. It also shaped how those governments treated — and continue to treat — Indigenous peoples. 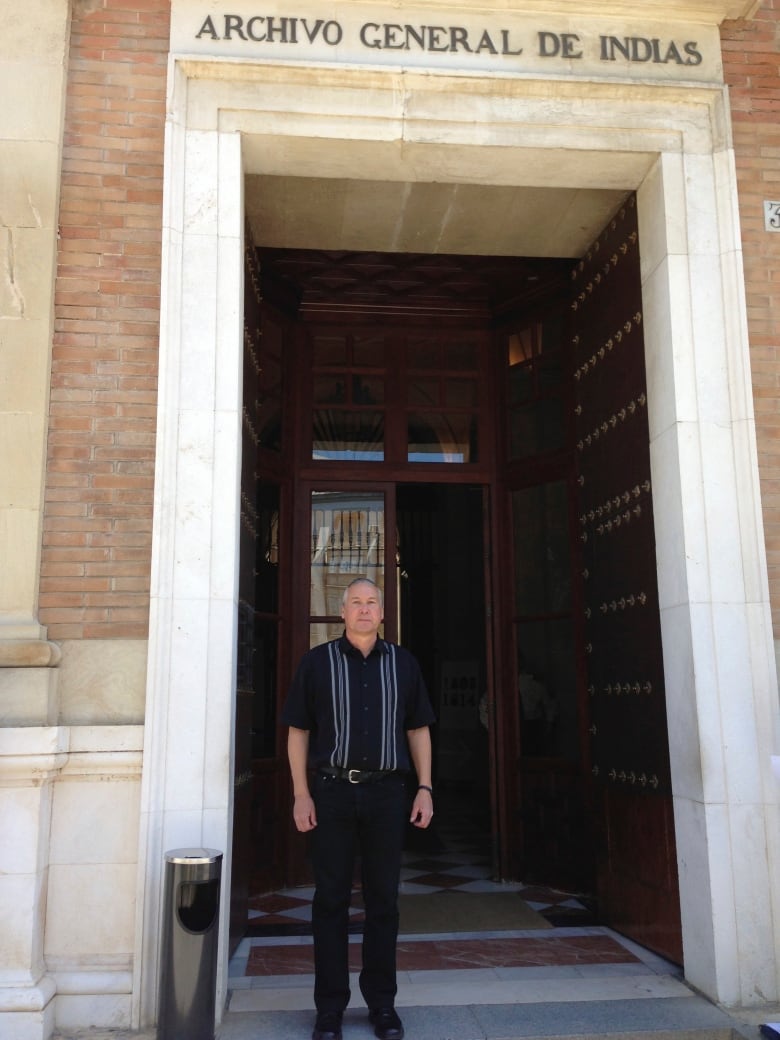 Since the 1990s, Newcomb has joined forces with other Indigenous peoples to call upon the Catholic Church to revoke the bulls.

So far, this work has taken him to Seville, Spain, where he saw the original bulls, and the Vatican, where he met Pope Francis and asked him to revoke the papal bulls.

Church has yet to acknowledge its impact

But Newcomb says the Catholic Church still hasn’t publicly acknowledged the damage unleashed by the doctrine of discovery.

“And so people don’t know the truth,” he said.

That’s where Newcomb’s work comes in, which he said is part of a “healing process” impacting every living thing.

“As we said in our letter to Pope John Paul II way back in 1993, ‘We invite you to walk with us on the sacred path, in honour of our mother, the earth, and to have a sacred regard for all living things,'” said Newcomb.

“It’s in that spirit that I keep moving forward.”

The world of Christendom during the fifteenth, sixteenth, and later centuries claimed to have a God-given right of domination in relation to lands where non-Christians (“infidels,” “heathens,” and “savages”) were living. Based on this claim of a divine right of domination and dehumanization, the U.S. Supreme Court defined the land title of Native nations as a “mere right of occupancy” subject to a U.S. doctrine of Christian discovery and domination.  Eminent theologian Dr. Luis Rivera-Pagán is interviewed about his book A Violent Evangelism: The Religious and Political Conquest of the Americas (1992). He talks about the devastating effects of dehumanization, which he calls, “the absolute devaluation of one’s being.” https://www.rednationff.com/the-doctrine-of-discovery-unmasking-the-domination-code/

Terra nullius (/ˈtɛrə.nʌˈlaɪəs/, plural terrae nullius) is a Latin expression meaning “nobody’s land”,[1] and is a principle sometimes used in international law to describe territory that may be acquired by a state’s occupation of it.[2]

Dum Diversas (English: Until different) is a papal bull issued on 18 June 1452 by Pope Nicholas V. It authorized Afonso V of Portugal to conquer Saracens and pagansand consign them to “perpetual servitude”.[1][2] Pope Calixtus III reiterated the bull in 1456 with Inter Caetera (not to be confused with Alexander VI‘s), renewed by Pope Sixtus IV in 1481 and Pope Leo X in 1514 with Precelse denotionis[clarification needed]. The concept of the consignment of exclusive spheres of influence to certain nation states was extended to the Americas in 1493 by Pope Alexander VI with Inter caetera.[3][4][5][6]

“We grant you [Kings of Spain and Portugal] by these present documents, with our Apostolic Authority, full and free permission to invade, search out, capture, and subjugate the Saracens and pagans and any other unbelievers and enemies of Christ wherever they may be, as well as their kingdoms, duchies, counties, principalities, and other property […] and to reduce their persons into perpetual servitude (slavery).[3]”

The Discovery doctrine is a concept of public international law expounded by the United States Supreme Court in a series of decisions, most notably Johnson v. M’Intosh in 1823. Chief Justice John Marshall explained and applied the way that colonial powers laid claim to lands belonging to foreign sovereign nations during the Age of Discovery. Under it, title to lands lay with the government whose subjects travelled to and occupied a territory whose inhabitants were not subjects of a European Christian monarch. The doctrine has been primarily used to support decisions invalidating or ignoring aboriginal possession of land in favor of colonial or post-colonial governments.

The Doctrine of Discovery was promulgated by European monarchies in order to legitimize the colonization of lands outside of Europe. Between the mid-fifteenth century and the mid-twentieth century, this idea allowed European entities to seize lands inhabited by indigenous peoples under the guise of discovery.[3] In 1494, the Treaty of Tordesillas declared that only non-Christian lands could be colonized under the Discovery Doctrine.

In 1792, U.S. Secretary of State Thomas Jefferson declared that the Doctrine of the Discovery would extend from Europe to the infant U.S. government. The Doctrine and its legacy continue to influence American imperialism and treatment of indigenous peoples.[4]

https://upstanderproject.org/firstlight/doctrine/  …If an explorer proclaims to have discovered the land in the name of a Christian European monarch, plants a flag in its soil, and reports his “discovery” to the European rulers and returns to occupy it, the land is now his, even if someone else was there first. Should the original occupants insist on claiming that the land is theirs, the “discoverer” can label the occupants’ way of being on the land inadequate according to European standards. This ideology supported the dehumanization of those living on the land and their dispossession, murder, and forced assimilation. The Doctrine fueled white supremacy insofar as white European settlers claimed they were instruments of divine design and possessed cultural superiority.

The significance of the Doctrine continues to be debated. According to David Wilkins, “it is more complicated than just saying the Pope gave European Catholics the rights to colonize and convert. In reality, the absolute denial of Native land rights was replaced less than fifty years later when Charles V… sought the advice of Francisco de Vitoria … as to what the Spanish could legally and morally claim in the New World. Vitoria, in a clear rebuttal to the Pope and the discovery notion, declared that Native peoples were the true owners of their lands.”

The Doctrine of Discovery was the inspiration in the 1800s for the Monroe Doctrine, which declared U.S. hegemony over the Western Hemisphere, and Manifest Destiny, which justified American expansion westward by propagating the belief that the U.S. was destined to control all land from the Atlantic to the Pacific and beyond.

In an 1823 Supreme Court case, Johnson v. M’Intosh, the Doctrine of Discovery became part of U.S. federal law and was used to dispossess Native peoples of their land. In a unanimous decision, Chief Justice John Marshall writes, “that the principle of discovery gave European nations an absolute right to New World lands”[1] and Native peoples certain rights of occupancy. 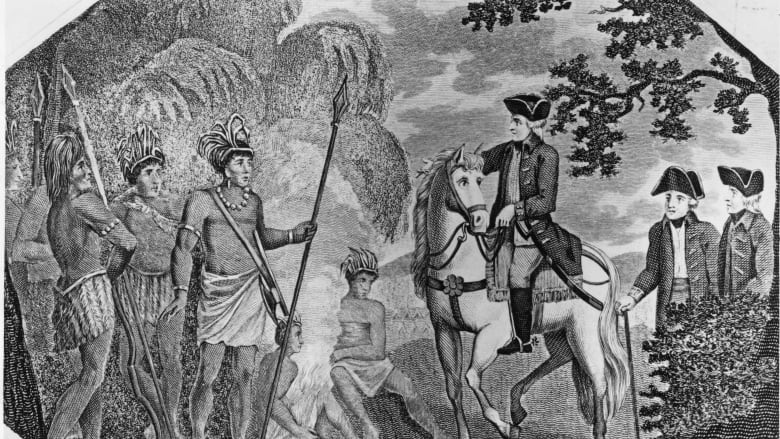 In May of this year, Prime Minister Justin Trudeau visited Pope Francis at the Vatican.  At the heart of his audience with the Pope was a request.

Trudeau asked Pope Francis to issue a public apology for the Catholic Church’s role in establishing and running Residential Schools in Canada. Such an apology is among the ‘calls to action’ from the Truth And Reconciliation Commission.

But the troubled history of the Catholic Church and indigenous people stretches back centuries.

These words were written more than 500 years ago … any non-Christian people ‘discovered’ by European explorers were to be vanquished and subdued. Direct quote: “Subjugated – and brought to the faith.”

They are called papal bulls, edicts made by Popes Nicholas V and Alexander VI in the fifteenth-century that instructed how European explorers were to treat Indigenous people.

The Vatican directives became the basis of centuries of discriminatory laws in both Canada and the United States.

Here’s an excerpt: “That in our times, especially the Catholic faith and the Christian religion be exalted and be everywhere increased and spread, that the health of souls be cared for, and that barbarous nations be overthrown and brought to the faith itself.”

This, according to Roxanne Dunbar-Ortiz, was clear permission for Europeans to conquer the world’s Indigenous people.

“This is the basis for boarding schools, the basis for genocide. They could do anything they wanted with the people because not only did they own the land, but the people, their labour, everything,” she says.

Roxanne Dunbar Ortiz is a historian and activist in San Francisco. She has worked with the international indigenous movement for more than 40 years.

She is one of the world’s leading authorities on the papal bulls, which are the basis of the Doctrine of Discovery, a historical concept that claimed the right of Europeans to colonize Indigenous people.

She says that both the church and state were colonizers with purely economic interests. The exploration of the “New World” was not a search for Christian converts but a quest for “domination, looting, taking the wealth.”

Five hundred years after the original papal decrees, Dunbar-Ortiz says “the moral fabric of the whole society is corrupted.”

Canada’s Truth and Reconciliation Commission found that the country’s residential school policy could be traced back to these original papal bulls. The Final Report of the Commission quotes political leader and educator Sol Sanderson: “What were the objectives of these empire policies? Assimilation, integration, civilization, Christianization and liquidation. Who did those policies target? They targeted the destruction of our Indigenous families worldwide.”

The echoes of those decrees can also be seen in the abuse of Indigenous lands, such as the mercury poisoning of the Wabigoon River and Clay Lake in Grassy Narrows First Nation in Ontario.  Fifty years after the original dumping of mercury by a pulp and paper company, the young people of the community have recorded a song, Home to Me, to bring attention to their challenges and assert their pride.

Author and scholar Blair Stonechild was a residential school student in Saskatchewan in the 1960’s. Now a professor of Indigenous Studies at First Nations University of Canada in Regina, he believes that part of the cure for centuries of scarred land and wounded spirits lies in reclaiming Indigenous spirituality. “Bringing back what to me are very natural, sensible concepts of spiritual relationship to the environment, recognizing that everything has a spirit.”

Special thanks to Tina Pittaway for producing the interview with Roxanne Dunbar-Ortiz.