Sisters should no longer serve as maids attending to priests, Pope Francis said in unscripted remarks on May 10 to the heads of women’s religious orders.

They can provide other forms of care and administrative work but more effort must be made to guard against their exploitation, the pope said during a question-and-answer session in the Vatican’s Paul VI Hall.

“You did not become a religious in order to become the maid of a priest,” the pope told 850 members of the International Union of Women Superiors General (UISG) at the end of their May 6-10 general assembly. The women superiors represent more than 450,000 sisters in over 100 countries.

Interreligious dialogue, cross-cultural experiences, caring for children and the planet, and the future of religious life were among the topics on the agenda.

“We are also grateful for your having faced the painful issue of abused religious,” Sister Carmen Sammut, superior general of the Missionary Sisters of Our Lady of Africa and the outgoing UISG president, told Pope Francis.

The pope described this as a “grave problem” but said abuses of power and conscience were also now firmly on the Church’s radar.

“We have to fight against this,” he said, noting how the bishops’ summit in Rome in February on safeguarding children and women from abuse had left some victims’ groups unsatisfied.

The UISG also praised the pope for ordering a probe into whether women deacons in the early church were “ordained” or formally “blessed,” despite the announcement earlier this month that the commission had failed to reach a unanimous conclusion.

Francis, who said more studies were needed, added it was also important for the Church to keep pace with the changing times.

“We cannot change revelation (but) is true that revelation develops” because it is in “constant movement in order to make itself more clear,” he said, citing his decision to revise the Catechism in full opposition to the use of the death penalty.

“Regarding the diaconate, we have to see what was at the beginning of revelation. And if there was something, let it grow; if there was nothing, if the Lord did not want a sacramental ministry for women, it’s not OK. That’s why we turn to history,” he said. 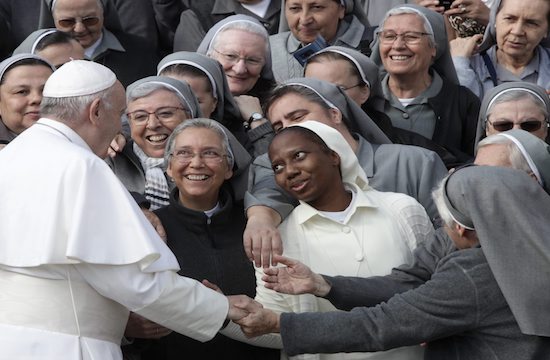 Pope Francis greets nuns at the end of his weekly general audience in St. Peter’s Square at the Vatican, on Oct. 31, 2018. (Photo by UPDATE IMAGES PRESS/Isabella Bonotto/MaxPPP)