by mvennerPosted on May 23, 2019
“The peoples of the Amazonia region are asking the Church to be present,” said Mauricio Lopez, executive secretary of the Pan-Amazonian Ecclesial Network (REPAM), which has organized 260 “listening moments” that were attended by 22,000 people from the whole Amazonian region in recent months.

Cardinal Hummes repudiated the “economic neocolonialism” manifested particularly in the greed of agricultural business and the mining industry. 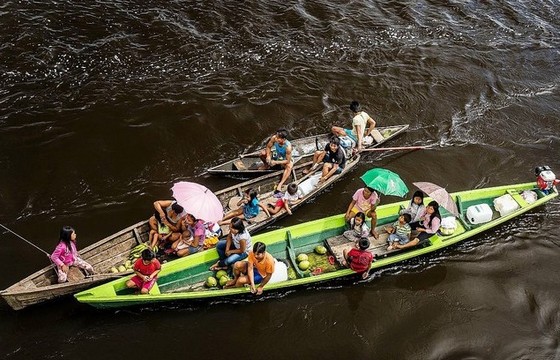 Several months ago, the Jesuit leader in Brazil’s Amazonia region, Father David Romero, visited a small community that had not been visited by a priest for 10 years.

“I went to celebrate Mass in a village where where there only remained a single Catholic family,” Peruvian Jesuit Pablo Mora, who accompanied Father Romero, explained. “But all the other families, who had become evangelicals, also attended because they hungered for the Eucharist. We were with people who had been abandoned pastorally.”

In light of the ecological threat, the issue of the Church’s presence in the region is expected to be central to the Synod on the Amazon called by Pope Francis and to be held at the Vatican in October.

This issue was also canvassed during a May 16 conference at the Gregorian University in Rome.

“The peoples of the Amazonia region are asking the Church to be present,” said Mauricio Lopez, executive secretary of the Pan-Amazonian Ecclesial Network (REPAM), which has organized 260 “listening moments” that were attended by 22,000 people from the whole Amazonian region in recent months.

Amazonia with its immense resources and influence on the global climate is the second most important geopolitical region in the world after the Middle East, Father Lopez said.

Is this sufficient reason to justify organizing a special assembly of the Synod? REPAM president Cardinal Claudio Hummes, the former archbishop of Sao Paulo, Brazil, and the president of REPAM, who was appointed as rapporteur general for the Synod by Pope Francis, believes so. “Amazonia has never been as threatened as it is now,” he said.

Cardinal Hummes repudiated the “technocratic paradigm” that he said had gradually shifted concerns for human beings to a second level in favor of an “economic neocolonialism” manifested particularly in the greed of agricultural business and the mining industry.

“Because of its faith in the Creator and the Incarnation of Christ, the Church must assume care for our common home,” he added, emphasizing the face of the Church in Amazonia, which he said must “listen to the cry of the poor and the cry of the Earth.”

“Clearly, this is not easy because of the huge distances involved, which prevent priests from reaching communities, but it illustrates the importance of having an inculturated Church,” he added.

Hence, the fears in certain quarters that the Synod on Amazonia may lead to challenging the priesthood, the end of celibacy or the ordination of women.

“Actually, we need to change the software,” said Father Mora.