Statement by Yasmina Mrabet, on behalf of Justice First & LinkUp

After months of negotiations between the Basilica Tenants Associations, their Legal Aid attorneys, the Basilica of the National Shrine of the Immaculate Conception, and local developers, residents have secured a major victory, and prevented the displacement of working class families at three buildings – a feat that seemed impossible just a few months ago.

Tenants across 3 separate buildings worked together to find a developer willing to purchase the buildings and ensure that the housing remains affordable. This seemed a near impossible task due to the price that the Basilica demanded, the lack of support from the Department of Housing and Community Development (DHCD) for small building projects, the extensive lending requirements by banks, and the short Tenant Opportunity to Purchase Act (TOPA) timeline. Yet, due to hard work, perseverance and relentless organizing, the first building of the project has been sold to a community developer who has signed a contract committing to work with the tenants and not displace them. This major victory against gentrification shows that tenants can fight displacement, even when the law provides few if any options, through sustained and highly visible organizing.

It was unclear whether or not victory was possible back in September of 2018, when tenants and supporters gathered outside of the Basilica of the National Shrine of the Immaculate Conception, rallying to demand that the Church adhere to its moral responsibility to protect affordable housing and prevent displacement. Approximately 600 leaflets were handed out to parishioners at the time. Behind the scenes, Housing Counseling Services and Legal Aid worked closely with residents to exercise their legal TOPA rights. 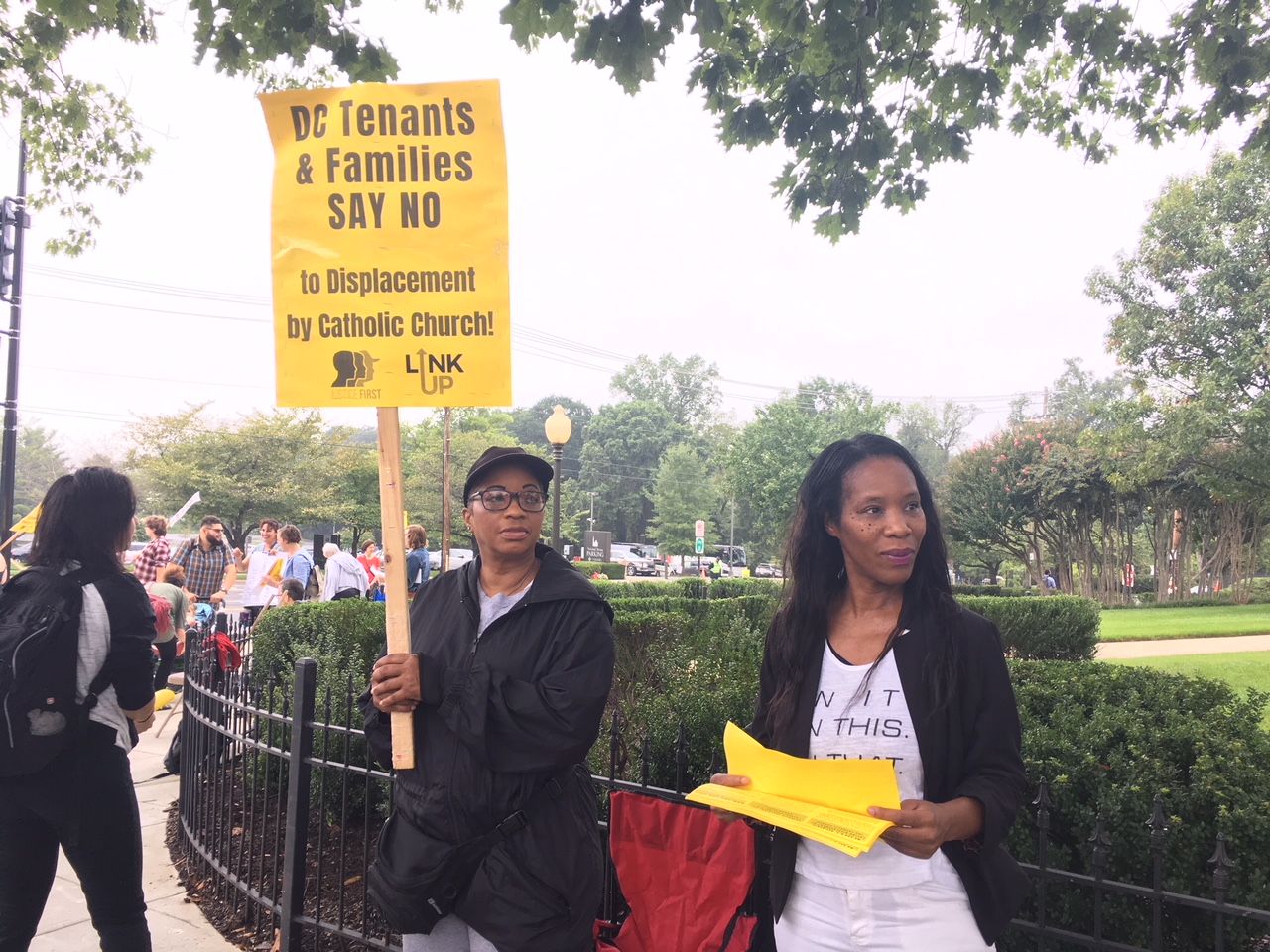 Tenants Karen Young and Jackie McClain speak to parishioners and hand out leaflets outside of the National Shrine.

Throughout the course of this struggle, we have argued that the Catholic Church has vast resources at its disposal, and could easily engage in good-faith negotiations with tenants in order to prevent the displacement of residents and families, and atone for the role the Church has played in the rapid gentrification of Washington, D.C. After significant public pressure, strong unity among tenants, and the diligent work of their Legal Aid representatives, an agreement has been reached, including the sale of 636 Girard St. NE to Kaizen Community Strategies LLC.

Heather Benno, Vice President of the 636 Girard St. NE Tenants Association confirmed today that they have secured the ability of all tenants to stay, with the option to buy and return to rentals far below market rate following building renovations. Rent control remains in place, so that tenants with disabilities do not see any increase in rents above normal.

In the coming weeks and months, we will be releasing interviews with tenants and discussing this housing victory in Washington, D.C., a city with the highest ‘intensity’ of gentrification in the country.