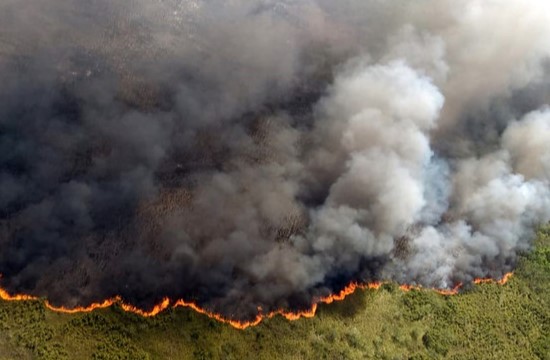 Bishops of the eight countries of Mesoamerica (Central America and Mexico) met to discuss how to protect the region’s ecology. (Photo by Ho/AFP)

The first ever meeting of Catholic bishops representing Central American countries is being held in Mexico City from Sept. 29 to Oct. 3 to work on ecology issues.

“REEMAM will have to take into account the transnational and ecclesial dimension of the commitment to the protection of life,” said the President of the Latin American Episcopal Council (Celam), Archbishop Miguel Cabrejos Vidarte of Trujillo, Peru, in a video message to participants.

The bishops will have to “unite their efforts to protect the fundamental rights to life of the inhabitants” of this Latin American region that hosted the Church’s World Youth Day in January 2019.

Since 2017, as a follow-up to the encyclical Laudato si’, integral ecology workshops have been organized in Mexico and in each of the Central American countries, the last one being held this year in Panama.

Each workshop allowed a “pastoral discernment” and the identification of “common criteria and action programs”, according to a REEMAM statement.

“REEMAM must become a relevant instrument in the search for justice, the promotion and defence of human rights”, the press release added.

Therefore, “it must promote cooperation between churches and public authorities at different levels. It must work toward equitable economic development, responsible and supportive use of natural resources, and the preservation of traditional cultures and lifestyles in the region.”

This ecclesial network also wants to “better understand the problems that challenge the prophetic proclamation of the Gospel in order to be able to have a positive impact on the lives of the inhabitants” of this region.

REEMAM will therefore have to pay close attention to the thousands of migrants who cross Central America, under increasingly difficult conditions, in order to find work in North America.

This ecological network of Central American bishops is being co-led by CELAM’s Department of Justice and Solidarity and the Caritas General Secretariat for Latin America and the Caribbean.