Citing as an example the pastoral councils in a large number of parishes, Bishop Centellas proposed that these councils should no longer be merely consultative, as is the case currently.  A Synodal Church means not only “walking together” but also “deciding together.” 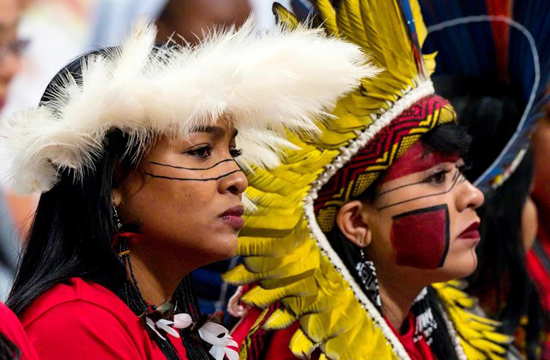 Participants at the Synod during Mass celebrated by Pope Francis on the occasion of World Missionary Day, at St. Peter’s Basilica in the Vatican, Oct. 20. (Photo by ANGELO CARCONI/ANSA VIA AP)

The Synod of Bishops’ special assembly on the Amazon’s midday press briefing in the Vatican focused on the place and role of women in the Church.

“The place of women is a question of mentality and we all need to change our mentalities so that there is real equity,” said Bishop Ricardo Ernesto Centellas Guzman of Potosi and President of the Bolivian Bishops’ Conference on Oct. 23.

However, to implement this equity, efforts should be initiated “at the parish- and diocese-level” before waiting for the green signal from the Vatican, Bishop Centellas said.

“It is not normal for women to be in the majority in the pastoral care of the Church and almost invisible in decision-making processes,” Bishop Centellas said.

About the changes that the Synod could propose in this regard, the Bishop of Potosi said that the Synod on the Amazon, which ends on Oct. 27, “can change the context,” insofar as it made people more aware that “in the ecclesial structure only a few people make decisions.”

Citing as an example the pastoral councils in a large number of parishes, Bishop Centellas proposed that these councils should no longer be merely consultative, as is the case currently.

“Nothing prevents them from also being deliberative,” he said.

A Synodal Church means not only “walking together” but also “deciding together.” Hence the urgency to “give women the decision-making power,” he said.

Zenildo Lima da Silva, rector of the inter-diocesan seminary São José in Manaus that welcomes more than 500 seminarians, including indigenous persons, and vice-president of the Brazilian seminaries’ organization, stressed the need to rethink formation of future priests.

To change the image and governance of a male-dominated Church, he pointed out, it would be necessary to take into account that “the pastoral capacities of the Church are mainly the fruits of a female sensitivity.”

“From the point of view of canon law, much more can be done than is being done,” said Cardinal Oswald Gracias of Bombay (India) and a member of the council of six cardinals mandated by Pope Francis to advise him on the reform of the Curia.

While reminding people that women cannot celebrate Mass, hear confession or administer confirmation, “they can do almost anything else,” he said.

“Women may even be in charge of a parish and preside over an ecclesiastical tribunal in accordance with the Church law,” Cardinal Gracias suggested.

“We must make much greater use of all these possibilities,” he added, noting that Pope Francis “is very keen on the decentralization of the Church.”

To empower women, bishops can promulgate changes “and can do so without the authorization of the Holy See,” Cardinal Gracias pointed out.

In response to a question, Sister Roselei Bertoldo of the Sisters of the Immaculate Heart of Mary, stressed the importance of women’s participation in evangelization in their own way and sought access for women in decision-making.

“There is still a long way to go to recognize our presence in order to become more active in the Church,” said the nun.

Sister Bertoldo is the founder of A Cry for Life network that fights human trafficking in Brazil, especially among indigenous women and girls who, under the pretext of an invitation to study in the city, often find themselves “trapped as domestic or sexual slaves.”

According to the nun, “this Synod is charting out a new course of action with the participation of 35 women.” This is for the first time that women are so numerous at a Roman Synod, she said.