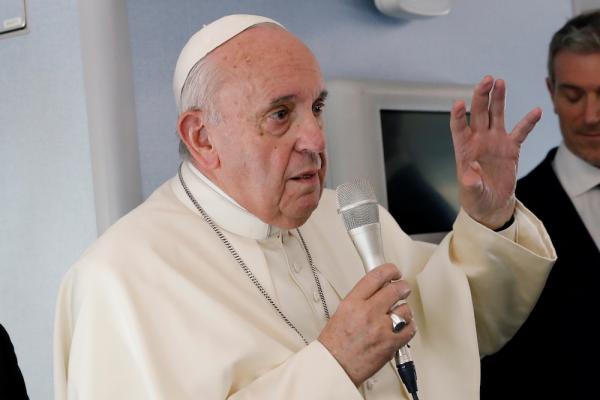 Pope Francis announced this week that “the use of nuclear weapons is immoral, which is why it must be added to the Catechism of the Catholic Church.”

Two years after the Vatican State signed the Treaty on the Prohibition of Nuclear Weapons (currently ratified by 34 countries), he declared during an in-flight press briefing from Japan to Rome, “Not only their use, but also possessing them: because an accident or the madness of some government leader, one person’s madness can destroy humanity.”

Nearly 75 years after the United States used nuclear weapons against Japan —killing, by some estimates 150,000 people in Hiroshima and 75,000 in the historic Catholic city of Nagasaki — Pope Francis reiterated that nuclear weapons are a threat to humanity, strategically reckless, and an offense to the poor and to God.

If the pro-life, anti-nuke Pope’s position is formally added to the catechism, the collected principles of faith used in basic instruction in the Catholic Church, then second-graders in Catholic schools will learn that that nuclear weapons are a sin, in the same moral category as intentional murder and the death penalty. As Jesuit Richard McSorley put it in Sojourners in 1977, “building a nuclear weapon is a sin” and “our possession of them is a proximate occasion of sin.”

What does this evolution of moral principles mean for lay Catholics who are required to answer for our complicity in unjust laws or unjust social situations?

“There’s a sense in Catholic teaching that it’s not just what we do but what we don’t do that we’re responsible for,” said Jeannine Hill Fletcher, a theologian at Fordham University.

Hill Fletcher comments were made in a pre-trial hearing in defense of a priest, former nun, Dorothy Day’s granddaughter, and four other Catholics who used bolt cutters to enter a remote gate at the Naval Base Kings Bay in St. Mary’s, Ga., the location of one of the largest known collections of nuclear weapons in the world, to nonviolently and publicly denounce nuclear weapons in April 2018.

The Catholic anti-nuclear protest at Kings Bay was the first following the Treaty on the Prohibition of Nuclear Weapons and Pope Francis’ public statement that the “threat of their use as well as their very possession is to be firmly condemned.”

In October, more than 18 months after the nonviolent demonstration by the Kings Bay 7, a jury found them guilty of three felonies and a misdemeanor. They face nearly 25 years in prison. The youngest of them is 55.

Hill Fletcher and Bishop Joseph R. Kopacz of the Catholic diocese of Jackson, Miss., provided testimony before Judge Benjamin Cheesbro in U.S. District Court for the Southern District of Georgia to substantiate the defendants’ claim that all charges should be dropped based on the 1993 Religious Freedom Restoration Act.

Hill Fletcher explained that Catholic social action is a doctrine “rooted in prior articulations going all the way back to scripture” that addresses “how the Church is supposed to engage in the modern world.” According to court transcripts, both experts testified that “the actions of the defendants are in accordance with Catholic social teaching on the primacy of conscience.”

Bishop Kopacz agreed that engaging in symbolic nuclear disarmament to bring attention to the possible consequences of nuclear weaponry is “certainly within … our tradition of faith.” In the early 1980s, the Conference of Catholic Bishops (of which Bishop Kopacz is a member) approved of the short-term possession of nuclear weapons. However, the Catholic Church has since “developed and evolved to say that there’s no acceptance for these weapons that no one can control once they’re unleashed.”

Bishop Kopacz explained that “words are not going to stop it,” but “action at least has a chance of stepping into the breach and making a difference, again, not terroristic actions, but actions that do no harm to people but yet make a powerful statement, as has been done here.” He stated, “That that kind of breaking of the law, again, nonviolent resistance to what is perceived as evil, to what is believed to be evil, is … very justified.”

The Kings Bay 7 will appear in court in January for final sentencing.

As Pope Francis moves to include the immorality of “use” or “possession” of nuclear weapons into Catholic catechism, will these seven American Catholics become religious prisoners of conscience?

The U.S. Commission on International Religious Freedom defines religious prisoners of conscience as individuals who are “imprisoned, detained, under house arrest or disappeared for their religious beliefs, non-belief, identity, activity and/or advocacy for freedom of religion or belief or related rights, provided that they have not used or advocated violence.”

The Commission’s focus is defending religious freedom around the world as part of U.S. foreign policy.

The issue is trickier at home, especially when the courts pit “religious freedom” against “national security.”

If the Kings Bay 7 do not have their sentences suspended in January, then could they become Religious Prisoners of Conscience, as defined by the Commission, in the United States?

Rose Marie Berger is senior associate editor of Sojourners magazine, a contributor to the Catholic Nonviolence Initiative (a project of Pax Christi International), and author of Bending the Arch: Poems (2019).