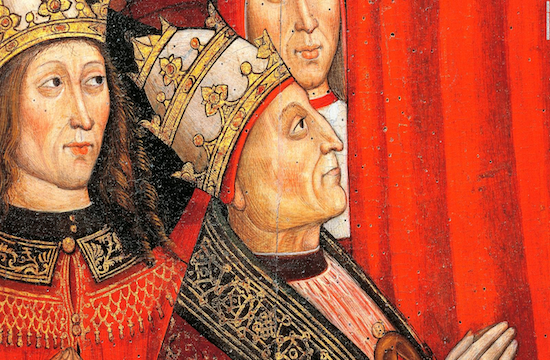 Pope Francis has the opportunity to take a bold stop and build on the success of the Synod of Bishops’ assembly on the Amazon and his post-synodal exhortation, Querida Amazonia.

He could revoke the 15th century papal bull that opened the door to the genocide of indigenous peoples in what are now called the Americas.

Of course, the issues of married priests and women’s ordination in the Amazon and beyond will not go away, despite the fact that Querida Amazonia is silent about the former and rejects the latter.

But of greater significance than those issues is the document’s prophetic reflection on the indigenous peoples and lands of the Amazon in light of the Gospel.

A step to undo a catastrophic historic injustice

And that’s where formal revocation of Pope Alexander VI’s bull of 1493, known as Inter Caetera, comes in.

Such a revocation would extend Querida Amazonia‘s prophetic engagement with the indigenous of the Amazon to native peoples around the world.

It would be a step to undo a catastrophic historical injustice. It would also bolster contemporary indigenous rights claims in land disputes. And it would affirm a powerful new vision for the people of God in the face of climate change.

In fact, for the last years indigenous peoples around the world have called for the bull to be revoked. In 2016, in an initiative called the Long March to Rome, tribal leaders met briefly with Pope Francis and for hours with Vatican diplomat Archbishop Silvano Tomasi to discuss the bull.

“What is happening to (the indigenous of the Amazon) now, happened to us in Dakota 120 years ago, when without consultation, they took our land away, based on economic gain,” he said.

Getting bullish over a problematic papal bull

In general, problematic papal bulls don’t get revoked. Like old soldiers, they just fade away.

A “bull” (from the Latin bulla, the authenticating seal at the end of a papal document) is a decree pertaining to policy. As a practical statement, a bull is neither dogmatic nor infallible.

In the last years, the Vatican’s United Nations office has said that Inter Caetera is a “historic remnant with no juridical or spiritual value.”

In 2015, Pope Francis apologized in Bolivia for “many grave sins” against native peoples committed by members of the Church in the course of the colonial occupation of the Americas. But he did not specifically apologize for or revokeInter Caetera.

The Borgia pope and a Spanish land-grab in the Americas

In an act that strikes us now as smacking of wild historical hubris, Pope Alexander VI (Rodrigo de Borja) in 1493 took a break from tending to his children (he had four) and inserted his Spanish origins into growing nationalist and colonial clashes between Spain and Portugal.

He accepted the stated purpose of King Ferdinand and Queen Isabella of Spain to bring the Catholic faith to the indigenous peoples whom Columbus had encountered, and accordingly declared:

“We…give, grant, and assign to you and your heirs and successors, kings of Castile and Leon, forever, together with all their dominions, cities, camps, places, and villages, and all rights, jurisdictions, and appurtenances, all islands and mainlands found and to be found, discovered and to be discovered towards the west and south, by drawing…the said line to be distant one hundred leagues towards the west and south from any of the islands commonly known as the Azores and Cape Verde.”

The pope rules the world

One was the assumption at the time of a universal papal jurisdiction derived directly from Christ for the purpose of the salvation of souls.

In effect, Alexander assumed a pope had sovereignty over the lands Columbus found and that such lands – and lands to be found in the future – could be given to the Spanish crown for the sake of the spread of the Gospel.

At the time of Inter Caetera, this ultimate appeal to universal papal jurisdiction co-existed uneasily with competing principles.

For instance, the Council of Constance in 1414 affirmed the natural law rights of non-Christian peoples to self-government and property. This affirmation prompted 16th century Jesuit philosopher Francesco Vitoria to argue that in principle the pope had had no right to give away native lands.

Depicting indigenous people as no people at all

Native peoples were made fit for plunder and death by a host of de-humanizing justifications: their tribal practices violated natural law; they were sub-human; they weren’t in a state of grace…

The prophetic 16th century Dominican Bartolome de las Casas denounced the practice of the colonial requerimiento. On pain of enslavement or war, indigenous peoples were required to accept Spanish rule and Catholic religious practices. But, in the face of this requirement, such peoples were also absurdly considered free to accept or reject Christian faith.

In the navy a captain is responsible for his ship and so it should be for the papacy itself. For beginning a process that was blinkered from the start and ran catastrophically out of control, the papacy should formally revoke Inter Caetera.

Tragic effects of the ‘doctrine of discovery’

But the Catholic Church must respond to more than historical cries of injustice. One of the Long March to Rome’s key claims is that the basic logic of the bull – that indigenous rights may be overridden for the sake of so-called higher purposes – supports contemporary ideologies that take indigenous lands.

To be sure, the Borgia pope’s “giving” indigenous lands to the Spanish for the sake of the Gospel was amply complemented in subsequent centuries by what came to be known as the “doctrine of discovery.”

This is the legal doctrine that emerged in the United States and spread throughout the world claiming that “discovery” of indigenous lands entitled European “discoverers” to ownership and sovereignty.

A landmark in this regard is the 1823 United States Supreme Court case called Johnson v. McIntosh in which the court held that it was “the exclusive right of the discoverer to appropriate the lands occupied by the Indians” and that these rights “which had previously been in Great Britain, passed definitively to these States.”

From conquering nations to greedy businesses: the lust for land

Of course, beneath the veneer of legalese suggested by the word “doctrine” was a dressed-down, raw lust. Europeans and Americans wanted indigenous land.

And to the claim of ownership based on discovery, other justifications were added. For instance, indigenous lands were “empty” or “unused” and, thus, fit to be taken over in the name of “progress” and “civilization.”

These same justifications are deployed today in land battles around the world between indigenous tribes and aggressive business interests often allied with governments.

Often these battles emerge out of a deliberate ambiguity over ownership.

In Brazil, for instance, there are 688 indigenous territories. But only 60.4% of this land has been officially designated by the government in a process known as demarcation. Without demarcation, the rights of ownership and use of indigenous lands are left in a murky, exploitable haze.

Pope Francis has raised his voice in protest against the ongoing efforts to take native land.

“The native Amazonian peoples have probably never been so threatened on their own lands as they are at present,” he said in 2018 while visiting Puerto Maldonado in the Peruvian Amazon.

A formal revocation of Inter Caetera would clear away any ambiguity from this prophetic push.

The argument for revocation also rests on recognition of the witness of the indigenous in the time of climate change.

Inter Caetera helped launch a process of profound exploitation – a process that can now be said to be culminating in a capitalism that is indifferent to its catastrophic effects.

Revocation of this 15thcentury papal bull would reject the letter and spirit of exploitation and confirm that the Church now sees in the life of indigenous peoples around the world what Pope Francis has said of the indigenous peoples of the Amazon:

They stand in equal dignity and reverent care for the earth as a prophetic challenge to “a style of life that is oblivious to its own cost.”

David E. DeCosse is director of Religious Ethics at the Markkula Center for Applied Ethics at Santa Clara University in California. Anthony Mejia is an undergraduate at the same Jesuit-run institution. You can follow Prof. DeCosse on Twitter @DavidDeCosse