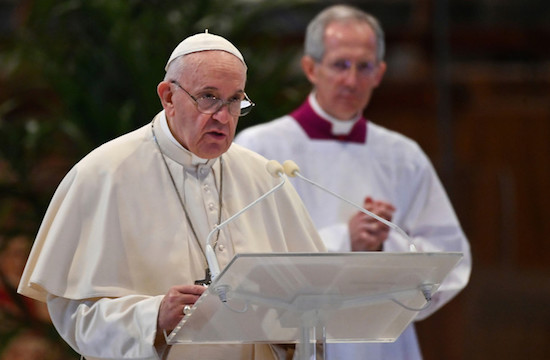 Pope Francis has seized the opportunity of the COVID-19 pandemic to propose a new social paradigm.

“Our civilization — so competitive and so individualistic, with its frantic rhythms of production and consumption, its extravagant luxuries, its disproportionate profits reserved for the few — must slow down, take stock and renew itself,” the pope says in a letter he addressed Easter Sunday to the popular movements of the world.

“I hope that this period of danger will free us from operating on auto-pilot, shake our sleeping consciences and allow a humanistic and ecological conversion,” he writes.

Francis says the pandemic should be a wake-up call for “governments to understand that technocratic paradigms (whether state-or market-centered) are not enough to deal with this crisis or other major problems affecting humanity“.

An ideal that is both human and Christian

“More than ever, individuals, communities and all people must be placed at the center, united to heal, to care and to share,” the pope urges in his letter.

To this end, he proposes the establishment of a “universal basic wage that would recognize and honor the noble and essential tasks” carried out by various types of workers. He specifically mentions “street vendors, scrap metal workers, fairground workers, small farmers, construction workers, dressmakers and caregivers“.

Francis says a “universal basic salary” would make it possible “to guarantee and make real the human and Christian motto: no workers without rights”.

He says he is relying on the Popular Movements, which embody a whole galaxy of precarious workers, migrants and poor peasants.

“You are creating admirable solutions,” the pope writes.

He commends those “excluded from the benefits of globalization”, telling them, “you do not resign yourselves to complaining”. At the same time, he says he knows “how difficult it is to stay at home for those who live in tiny, dilapidated dwellings”.

The indispensable builders of change

“If the fight against COVID-19 is a war, then you are truly an invisible army, fighting in the most dangerous trenches: an army whose only weapons are solidarity, hope and community spirit,” Francis says in his letter to members of the Popular Movements.

“When you testify that change is possible, your voice is authoritative,” he assures them.

He says the Popular Movements are “the indispensable builders of this change and can no longer be held back”.

Since his election in 2013, Francis has repeatedly expressed his support for the Popular Movements, inscribing them in the “Theology of the People”.

The world’s first-ever Latin American pope has held three meetings with movements — two at the Vatican and one in Bolivia.

“I must tell you,” he confides in his letter, “that the memory [of these meetings] warms my heart.”

He denounces that the poor workers “have been excluded from the benefits of globalization” but not from its prejudices: “the evils that afflict you all, strike you doubly”; encourages them to continue in the fight for 3Ts: land, roof and work; and invites them to think with him ” about the project of integral human development that we long for” for the post-crisis period.

Pope Francis has addressed himself by letter , today Easter Sunday, to the popular movements of the world, recalling his three meetings that “do me good, bring me closer to you, make me rethink so many dialogues”; and to “remember in a special way and be close” to the organizations of the most impoverished, precarious and excluded workers, in the face of the harsh pandemic of COVID-19 . Popular movements “are there, putting the body (…) to make things less difficult, less painful.”

In this time of “so much anguish and difficulty”, the popular movements “are a true invisible army that fights in the most dangerous trenches (…) with no other weapon than solidarity , hope and the sense of community that is flourishing these days. in which no one saves himself ”, building social poetry“ from the forgotten peripheries create worthy solutions ”, with scarce resources and where“ market solutions do not arrive and the protective presence of the State is scarce, ”emphasizes Francisco.

This attitude of struggle for “the common good” and for the sacred rights to land, shelter and work, which synthesize the criteria of social justice, “helps me, questions and teaches a lot,” says the Pope, in a context where they are “Look with mistrust for overcoming mere philanthropy through community organization or claiming for your rights instead of being resigned waiting to see if any crumb falls from those who hold economic power” that continues to generate enormous inequalities and maintain privileges.

In the letter, Francisco has a special memory and recognition of “the women, who multiply the bread in community dining rooms cooking” with little material “for hundreds of children”; of the sick and the elderly, so often forgotten in this lonely sick society; of peasants and family farmers “who continue to work to produce food” taking care of the common house and attending to the needs of the humble and hard-working people.

For a universal salary

“The evils that afflict everyone, you are double-hit,” denounces Francisco. A town with greater difficulties for confinement when housing is precarious or “lacks a roof”, when they live “day to day without any type of legal guarantees to protect them”, as workers and “independent or of the popular economy “that Francisco quotes:” the street vendors, the recyclers, the fairgrounds, the small farmers, the builders, the seamstresses, those who carry out different care tasks “, and that” they do not have a stable salary to resist this moment”. Faced with this reality of lack of protection, Pope Francis considers that it is ” time to think about a universal salary”That dignifies the“ noble and irreplaceable tasks that they carry out ”and makes reality“ that so human and so Christian slogan: no worker without rights ”. A humble and hard-working people to whom “our Heavenly Father looks at them, values ​​them, recognizes them and strengthens them in their choice .  “

People at the center of life. Think “after”

In this context of the huge impact of the coronavirus worldwide, Francisco hopes that “governments understand that technocratic paradigms (…) are not sufficient to address this crisis or the other major problems of humanity.” However, for the Pope “now more than ever, it is the people, the communities, the peoples who must be at the center, united to heal, care, share .”

In the letter, Francisco invites popular movements to “think about ‘the after’” and address the “serious consequences they already feel”. This experience of dialogue of the Pope with the popular movements, is developed from a culture of encounter and the “wisdom that is kneaded with the yeast of feeling the pain of the other as his own .” Reason for us to ” think about the integral human development project that we yearn for, focused on the protagonism of peoples in all their diversity and universal access to those three Ts that you defend: land, roof and work ” and which had its maximum expression in the three world meetings of popular movements with Francisco.

“I hope that this moment of danger will take us off the autopilot, shake our sleeping consciences and allow a humanistic and ecological conversion   that ends with the idolatry of money and puts dignity and life at the center.. Our civilization, so competitive and individualistic, with its frenetic rhythms of production and consumption, its excessive luxuries and excessive profits for few, needs to undergo a change, rethink, regenerate itself “, Francisco warns, to highlight the popular movements as” indispensable builders of that urgent change; Furthermore, you have an authorized voice to testify that this is possible. You know of crisis and deprivation…, that with modesty, dignity, commitment, effort and solidarity, they manage to transform into a promise of life for their families and communities ”, the Pope pointed out.