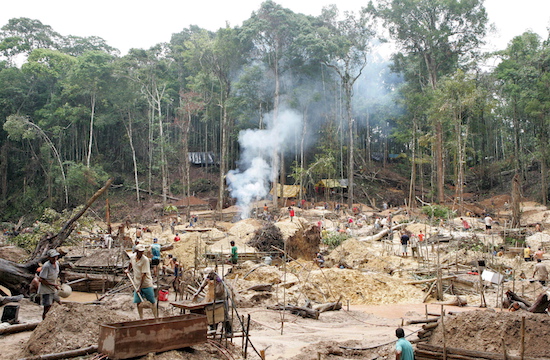 File photo of the impact of mining in near Manaos, capital of the Brazilian Amazonia. (Photo by RAIMUNDO VALENTIM/EPA/MaxPPP)

The Brazilian bishops’ conference has established a commission to assist dioceses in areas where mining operations are harming communities and the environment.

Meeting since December, the Special Commission on Mining and Integral Ecology is preparing to address Brazilian President Jair Bolsonaro’s plan to allow mining and other development projects on indigenous lands and elsewhere.

“About 25 percent of the indigenous lands and other reservations in the Amazon have been already registered by several mining companies” for extraction, Father Dario Bossi, a commission member, told Catholic News Service.

The commission emerged from a working group the bishops established in 2017 to study the consequences of hydraulic fracturing for natural gas and oil and to map the rising number of communities impacted by extractive industries.

The working group, led by Bishop Sebastiao Lima Duarte of Caxias do Maranhao, organized meetings among bishops and community residents to document conflicts with mining operations. The encounters led to a theological-pastoral reflection that was presented in Rome last October at the Synod of Bishops assembly for the Amazon.

The commission’s initial research demonstrated that conflicts between mining ventures and communities exist in at least 60 locales and that persecution of activists who oppose extractive operations was increasing.

“Brazil has always had an economy strongly based on extractivism,” Bossi explained. “The current mining model allows a reckless and usually irresponsible organization of extractivist activities. There are numerous tailings dams in critical situation in the country, with serious risks of collapse.”

Citing Pope Francis’ encyclical Laudato Si‘, on Care for Our Common Home, and the understanding that social and environmental rights are connected, Bossi said the commission advocates for the protection of traditional peoples.

He said the commission believes local communities should always be consulted before any mining project begins.