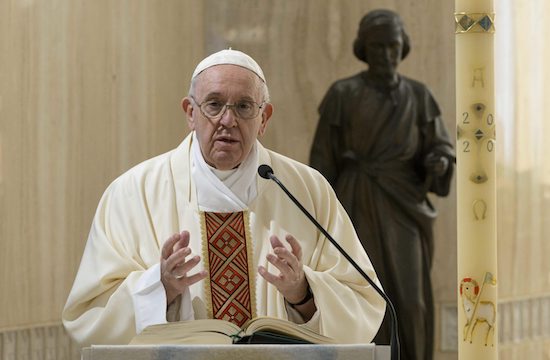 A handout picture provided by the Vatican Media shows Pope Francis celebrating Mass at Casa Santa Marta, in the Vatican, 1 May 2020. (Photo by EPA-EFE/VATICAN MEDIA/MaxPPP)

Pope Francis dedicated his morning Mass May 1 to workers, especially those paid unjustly or virtually enslaved.

“Today is the feast of St. Joseph the Worker,” celebrated also as International Workers Day and as Labor Day in many countries; “let us pray for all workers. All of them,” the pope said at the beginning of the Mass in the chapel of the Domus Sanctae Marthae.

He prayed that no one would be lacking a job and “that all would be paid justly and may enjoy the dignity of work and the beauty of rest.”

In his homily, focused on the creation story in the feast day’s first reading, Genesis 1:26-2:3, Pope Francis said it was “as if” God told the first human beings: “You must do this, care for this and that; you must work to create this world with me and keep it going.”

The work human beings do, he said, “is nothing other than the continuation of God’s work. Human work is the vocation received from God.”

“Work is what makes the person similar to God because with work one is a creator, is capable of creating, of creating many things, including creating a family to keep going,” the pope said. “And this gives dignity to the human person. The dignity that makes one resemble God. The dignity of labor.”

Unfortunately, he said, the dignity of labor is “often trampled on,” and not just by slavery in the past centuries, which everyone recognizes as “barbaric.”

“Even today there are many slaves, many men and women who are not free to work – they are forced to work to survive and nothing more,” he said. There are those who are forced to work for little or no pay, who are mistreated and even beaten, but have no escape, he added.